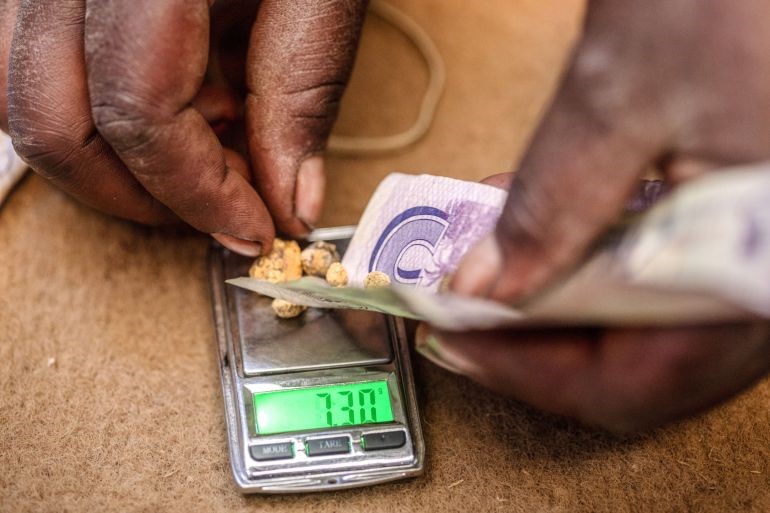 Zimbabwe Is Hemorrhaging Gold. Can A Key Reform Curb The Smuggling?

Harare, Zimbabwe – When Henrietta Rushwaya was arrested at Robert Mugabe International Airport in October for alleged gold smuggling, the news was shocking but not the purported crime.

The 56-year-old head of the Zimbabwe Miners Federation and former president of the country’s football body was preparing to board a flight to Dubai when authorities found six gold bars worth an estimated $366,000 in her carry-on luggage.

Rushwaya, who denies the charges against her, has not been granted bail and is waiting for a trial date to be set.

It is a spectacular scandal – one involving a powerful figure that only served to reinforce the widespread belief that Zimbabwe’s ruling elite and politically connected help themselves to the nation’s natural resources – especially gold – with near impunity.

Part of the problem, say analysts, is that gold producers have been forced to sell what they mine to a single firm controlled by the central bank that pays them below-market rates.

But hopes for long-overdue reforms were raised this week after the Reserve Bank of Zimbabwe announced it plans to sell off a majority stake of that gold buying outfit.

Gold extracted in Zimbabwe can be sold legally to only one buyer: the central bank-owned Fidelity Printers and Refiners (FPR).

Also a minter of notes and coins, FPR has been the sole, legal purchaser of Zimbabwean gold since the country gained independence in 1980.

But in recent years, gold producers have bristled at the deal they get.

The poor price is the result of FPR using a mix of United States dollars and Zimbabwean dollars to pay for precious metals. Large scale gold producers receive 70 percent of the purchase price in greenbacks and the remainder in Zimbabwe’s local currency.

That’s a serious blow to sellers’ bottom lines because Zimbabwe’s currency has been gripped by sharp devaluations for over a year and market exchange rates seriously lag what the street will bear.

Currently, it takes 105 Zimbabwean dollars to buy $1 on the black market, compared with a market exchange rate of 82 Zimdollars to one greenback.

That is a hefty chunk of gold producers’ profits lost to a local currency exchange rate divorced from reality, which incentivises smuggling.

“It’s common sense that producers and dealers will sell where they get the highest returns whilst Fidelity offers the lowest price in the whole world,” Maguwu said.

Fidelity offers the lowest price in the whole world

But the market is poised for a radical shake-up after the Reserve Bank of Zimbabwe announced on Wednesday that it is cleaving FPR into two separate business units.

Under the proposed plan,  the central bank will sell a 60 percent equity stake in FPR to gold producers.

“By being part of the decision-making process on gold trading, it is expected that the gold producers’ compliance levels in the trading of gold will significantly increase,” the central bank said.

Godfrey Kanyenze, Director of the Labour and Economic Development Research Institute of Zimbabwe, lauded the move.

“Certainly something had to give. The gold pricing regime left a lot to be desired and encouraged illicit flows,” he told Al Jazeera. “It’s commendable that they (central bank) have come up with the measures. It’s important that the miners themselves get involved in the gold value chain.”

Precious metals and gems are the country’s most valuable export, topping even tobacco.

“I think the impact of illicit flows on an economy such as Zimbabwe’s is quite big given the need for capital,” Gift Mugano, an economics professor the Zimbabwe Ezekiel Guti Univerity told Al Jazeera. “If this money was available in the economy, you would not see inflation, you would be guaranteed of a stable exchange rate. We would be guaranteed of a stronger currency,” he added.

Zimbabwe is in the iron grip of a deepening economic crisis characterized by triple-digit inflation and foreign currency shortages. A COVID 19 lockdown imposed in March only worsened the situation.

Stagnant salaries that fail to keep up with soaring prices and high unemployment are driving huge swathes of the population into risky informal jobs, including illegal mining.

But cracking down illegal operations is rife with challenges.  The gold extraction sector is overrun by small scale and artisanal mines, many of which operate under the radar and in unsafe conditions.

Deadly incidents have become all too common.  Just last month, at least 40 artisanal miners were trapped underground in a disused mine after a shaft collapsed.

Scattered in various locations all over the country, many of these small operations extract Zimbabwean gold which then finds its way into the hands of unscrupulous dealers who then ship it illegally to destinations in Southern Africa, the Middle East and Asia.

Roughly 50,000 small-scale miners are registered in Zimbabwe, employing on average at least 10 workers each, according to the Zimbabwe Miners Federation. But as the economy has collapsed and the price of gold has soared this year, the ranks of artisanal miners have soared to around 1.5 million says the Federation.

Moreover, the explosive growth of informal operators combined with a run-up in gold prices has provided a fertile breeding ground for violence.

“Each district or lucrative gold mining region has a mafia boss who controls the mining and the trade of the metal,” said CNRG’s Maguwu  “The country is fast deteriorating into warlordism.”

This year, armed police were deployed to troubled areas of the country with shoot to kill orders after machete-wielding gangs ran amok robbing artisanal miners of their gold and killing others.

Prior to the deployment, a group of 40 armed machete gang members laid siege to a police station in Midlands province as they attempted to break one of their members out of custody.

At least two cases of machete gang violence were recorded this month.

The crime wave may help explain why gold deliveries to FPR plunged 73 percent in September to 1.36 tonnes from 2.8 tonnes in the same period last year.

“Through smuggling, we are forfeiting our future as a people and country,” said Mugano. “As a country, we want to cry over sanctions but smuggling gold is the highest form of sanctions we can impose on ourselves.”