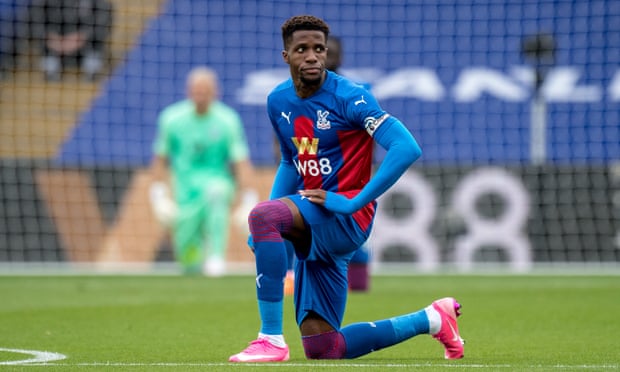 Premier league footballer Wilfried Zaha stated recently he will no longer be taking a knee as this is no longer enough.

The Crystal Palace forward instead pledged to “stand tall” when he returns after injury. “I feel like taking a knee is degrading,” he told the FT Business of Football conference. “Growing up, my parents just let me know that I should just be proud to be Black, no matter what, and I just think we should stand tall.

Since Project Restart last summer, players, officials and staff at Premier League and EFL games have been taking a knee before kick-off to show support for the Black lives movement for racial equality.

Premier League clubs’ shirts also carried the Black Lives Matter slogan during the restarted 2019-20 season before being changed for this season to feature a patch promoting the league’s own anti-discrimination campaign No Room For Racism.

England manager Gareth Southgate believes the gesture is still hugely powerful and has not lost its message, but racist abuse of footballers on social media has been prevalent in recent weeks with several teams, including Brentford last weekend, stopping taking a knee.

Crystal Palace winger Zaha, speaking at the Financial Times’ Business of Football summit, said: “I’ve said before that I feel like taking the knee is degrading and stuff because growing up my parents just let me know that I should be proud to be black no matter what and I feel like we should just stand tall.

“Trying to get the meaning behind it, it’s becoming something that we just do now and that’s not enough for me. I’m not going to take the knee, I’m not going to wear Black Lives Matter on the back of my shirt because it feels like it’s a target.

“We’re isolating ourselves, we’re trying to say that we’re equal but we’re isolating ourselves with these things that aren’t even working anyway, so that’s my stand on it. I feel like we should stand tall and now I don’t really tend to speak on racism and stuff like that because I’m not here just to tick boxes.”

He added: “Unless action is going to happen, don’t speak to me about it.”

While Zaha has not been as vocal on certain issues as other top-flight footballers such as Marcus Rashford, he believes he has a role to play to try and make a change.

He added: “I’m not really an activist but if I’ve got a platform to try and make a change, why not?

“Marcus Rashford, he’s got his platform there and he’s pushed through to make things happen and some people just tell him to stick to football and stuff, but how can you say that if he’s probably feeding your child?

“So obviously certain footballers will just play football and go home, but I feel like with the opportunity you have to broaden your horizon and do more, you only live once, why not? Then, if you can inspire people at the same time you’re doing it – it’s a win-win.”