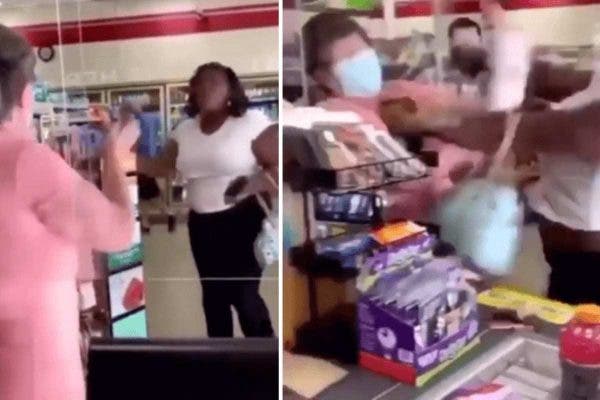 A white woman has gotten more than she could chew after getting punched in the face by a black woman for repeatedly using the N-word on her repeatedly.

In a video that has circulated online, the pair could be seen engaged in a charged argument, when the white woman dropped the N-word.

According to TMZ, the racially charged encounter took place Monday at a 7-Eleven convenience store in Sacramento, California.

While there appears to be some discrepancy about what started the confrontation, the white woman insisted she’d only said “Excuse me.” However, the Back woman said she heard something different, and then, the white woman dropped the N-word.

The unidentified Black woman issued a warning that she would beat up the white woman if she used the racial slur again, but she would go on to do it again, and she was louder.

It was this point that all hell broke loose, and the black woman threw punches which led to the white woman being knocked to the ground.

“Everyone pls, learn from Karen in Sacramento. If a black person tells you they are “the right one” or “the wrong one”, you most likely don’t want to be the other one “

The Sacramento Sheriff’s Dept. confirmed that deputies had responded to a call of two women fighting and when they arrived, the woman who got beaten up had to be treated by medical workers for minor injuries, while the other woman had left.

Initially, the injured woman admitted to the officers that she played her part in creating the brawl and declined to file a complaint. But after the clip started making the rounds on social media the next day, she seemingly had a change of heart and contacted police to file a report.

Though the Sheriff’s Office said they had not identified, charged, or arrested a suspect, a man claiming to be the Black woman’s husband said on social media that she had been arrested for assault.