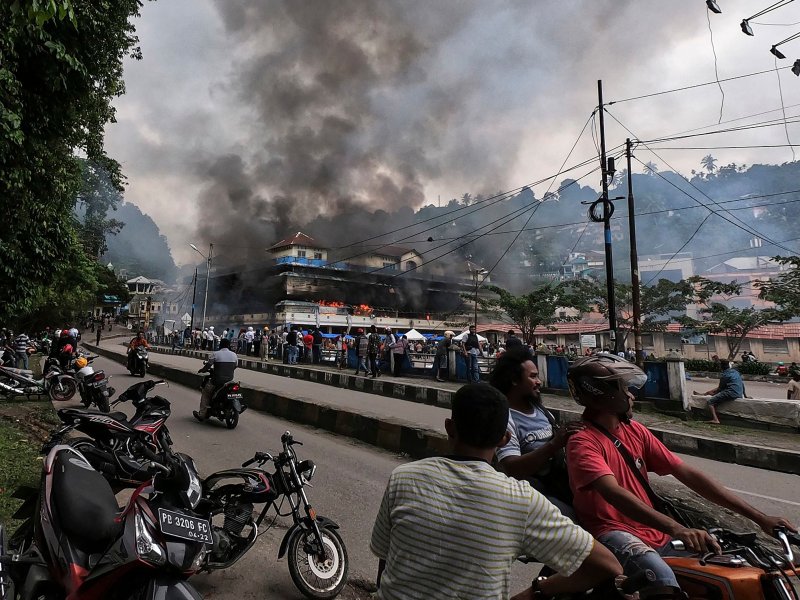 West Papua: A Racial Justice Campaign Brought New Attention To Indonesia’s Poorest Region. Will It Translate To Support For Independence?

As racial justice protests swept the U.S. this summer, a related movement was taking hold thousands of miles away in Indonesia. Papuan Lives Matter began as a hashtag on social media, spreading across the sprawling archipelago of 270 million people. Indonesians shared links to webinars and websites with information about human rights issues in the region of West Papua. An Instagram post saying “We cannot talk about #Black Lives Matter without talking about West Papua” received more than 8,500 likes. 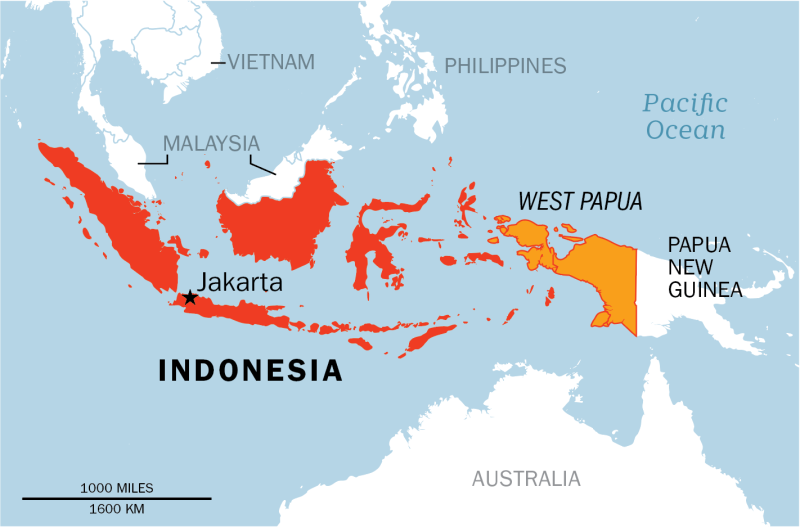 West Papua—which sits on the western half of the island of New Guinea, about 1,900 miles east of the Indonesian capital Jakarta—has seen decades of unrest Lon Tweeten for TIME

Within Indonesia, the movement brought unprecedented attention to the discrimination faced by Papuans, who are of Melanasian origin. Many Melanesian people also identify as Black; and are the majority in neighboring Papua New Guinea, as well as the Pacific island nations like Fiji and Vanuatu. Papuans make up just a tiny portion of Indonesia’s population nationally and consider their origins unique from other ethnic groups in the country.

For many people in West Papua—which sits on the western half of the island of New Guinea, about 1,900 miles east of the capital Jakarta—the struggle goes beyond racial equality. The former Dutch colony was declared part of Indonesia by a 1969 referendum. Just over 1,000 representatives—handpicked by the Indonesian military and officials—were allowed to vote in the referendum that declared West Papua part of Indonesia. Although the vote was recognized by the international community, many Papuans rejected it as rigged. A separatist struggle in the Indonesian provinces of Papua and West Papua—commonly referred to as the West Papua region—has been simmering ever since.

Amid renewed attention on West Papua, a coalition of pro-independence groups called the the United Liberation Movement for West Papua (ULMWP), announced on Dec. 1 that it had set up a government-in-waiting to start working toward independence for the some 4.3 million residents of Papua and West Papua. Long-time independence activist Benny Wenda has been nominated as the group’s interim president.

The Indonesian government, which considers the region an inseparable part of Indonesia, rejected Wenda’s move as a “farce.” A spokesperson for Indonesian President Joko Widodo said the declaration by Wenda’s group doesn’t meet the bar for a legitimate government—and that the government in Jakarta is the “sole authority” in the region. “It is final and ironclad from the perspective of international law,” a statement to TIME said. 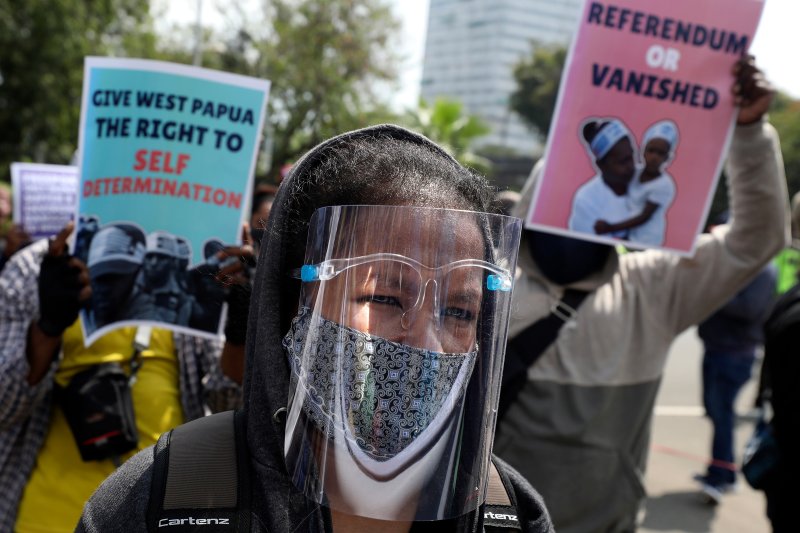 A Papuan pro-independence supporter wears a face shield during a rally commemorating the 58th anniversary of the New York Agreement outside the U.S. Embassy in Jakarta on Aug. 15. The agreement, signed by the Netherlands and Indonesia in 1962, led to Indonesia taking over West Papua from Dutch colonial rule in 1963 Dita Alangkara—AP

The issue of human rights in West Papua has attracted increasing attention—both within Indonesia and internationally—in recent years. The global anti-racism movement has sparked a new discussion about West Papua, and helped campaigners reach more people than ever before. “I think [Black Lives Matter] enabled Papuans to speak of racism in a way that Indonesians and others can understand,” says Ligia Giay, who helps publish the newsletter Voices of Papua.

“Papuan Lives Matter” also pushed Indonesians to consider what’s happening in its easternmost region in the context of racism. Camellia Webb-Gannon, the coordinator of the West Papua Project at the University of Wollongong in Australia, says that the issue of race hasn’t historically been discussed as a point of tension in West Papua. Previously, the struggle has been talked about in terms of colonialism, resource exploitation and human rights abuses. “They’re starting to see this in light of this international discourse around racism that’s happening in the U.S. in particular,” she says. “Suddenly these links have been made in West Papua too, and it’s taking off, so then a lot of Indonesians are picking up on it.”

But observers say that might not translate into support for Wenda’s government-in-waiting, or other independence movements. And it might not mean that a solution to the decades-long turmoil is close.

Indonesia maintains a heavy military presence in the region. Human rights observers and local activists say hundreds of thousands have been killed since the 1960’s by security forces. Access restrictions on international media and rights observers and internet blackouts make it difficult to determine an accurate count. Wenda says that he was spit on and called names by non-Papuan students and teachers growing up, and witnessed Indonesian soldiers brutalizing his family members, and others in his village.

“They treat us different. Because, we are different,” Wenda says. “They look at us as sub-human.” 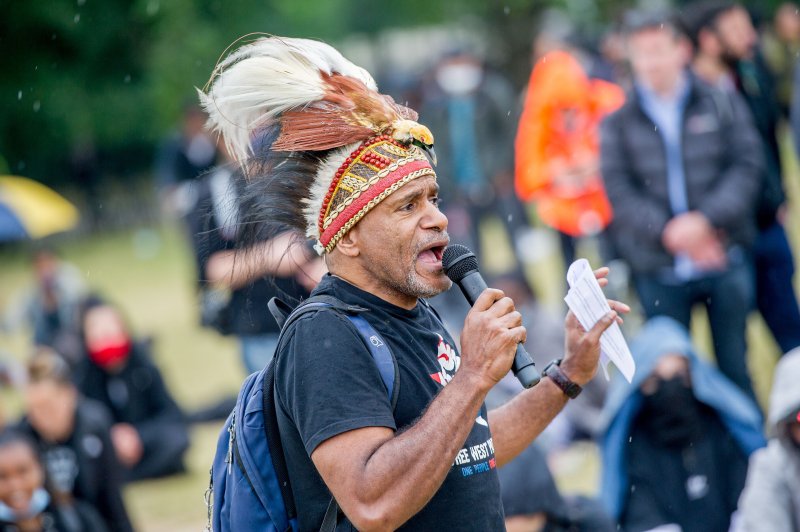 The government has been accused of human rights violations including torture, extrajudicial killings and poilitically motivated arrests. Wenda claims he is among them. The 46-year-old has been involved in pro-independence activism for decades. He fled to the U.K., where he has continued international advocacy for independence, after escaping from prison in 2002, where he faced charges for inciting an attack on a police station in which he denies involvement.

Economic inequality is another point of contention. West Papua has abundant resources—it is timber-rich and home to the world’s largest gold mine and third largest copper mine—but it is one of the poorest regions in Indonesia, Southeast Asia’s most populous nation and its largest economy. Around a quarter of the population lives below the poverty line. Environmental destruction, often linked to resource exploitation, is another grievance (Wenda says West Papua—if it won independence— would be the world’s first “Green State.”)

“Our people have been killed, our mountains have been destroyed, our forests have been ripped down,” says Wenda.

Migration has also been a source of tension. Data is scant, but government policies have led to an influx Indonesians from more populous islands like Java and Sulawesi, and non-Papuans may now comprise a majority of the population.

Tensions have been escalating. In 2019 unrest broke out in West Papua after police in Java—Indonesia’s most populous island, home to the capital Jakarta—reportedly called a group of Papuan students racist names like “monkey.” At least 43 people were killed, including at least one Indonesian soldier, according to Human Rights Watch. Over 6,000 troops were deployed to quell unrest.

On Nov. 30, one day before Wenda’s announcement of a government in exile, the U.N. Human Rights Office in Southeast Asia issued a statement that observers were “disturbed by escalating violence” in the West Papua region. The statement said the trend toward violence began when Papuan fighters killed 19 people in 2018 working on a road construction project—a faction of the independence movement called the West Papua Liberation Army claimed responsibility for the attack.

The government has committed billions of dollars to infrastructure projects in the region, and says it is “laser-focused” on development there. This has been met with some resistance, and led to clashes; for example, some Papuans fear that a road being built across the region will make it easier for the Indonesian military to access and open it up for resource exploitation.

“There have been repeated reports of extra-judicial killings, excessive use of force, arrest and continuous harassment and intimidation of protesters and human rights defenders,” the U.N. statement said.

Indonesian foreign ministry spokesperson Teuku Faizasyah criticized the statement, including its release the day before Dec. 1, which people in West Papua consider their independence day, saying it could be interpreted as support for Papuan separatists.

In a statement, Jaleswari Pramodawardhani, the Indonesian president’s deputy chief of staff, did not directly address the allegations of human rights abuses. But, she told TIME that the “law enforcement process is taking place as of this moment” and that the government has “initiated the establishment of a fact-finding team to expedite the law enforcement process” that includes government and law enforcement authorities, and independent representatives from the academic community, and civil society.

Some experts warn that Wenda’s announcement may exacerbate tensions. Richard Chauvel, an associate professor at the University of Melbourne’s Asia Institute, says the formation of a West Papuan government-in-waiting may compel Indonesia to “send more troops to what is already a heavily garrisoned region.”

Wenda’s campaign focuses mostly on self-determination and gaining independence from what he dubs “Jakarta’s illegal martial law.” But Wenda acknowledges that the Black Lives Matter movement helped spread information about West Papua. He spoke at Black Lives Matter rallies in London, and he has sometimes used #BlackLivesMatter and #PapuanLives Matter hashtags to spread his message on social media.

“A new generation of Indonesians [is] coming out on the street, a solidarity movement,” says Wenda. “Just like in America, ordinary people are coming together to say no more racism, no more intimidation, no more harassment.”

But Sophie Chao, from the University of Sydney, says that there is a risk that the Indonesian government will use the push for independence as a reason to limit the freedoms on the ground in West Papua.

And Webb-Gannon, the researcher in Australia, cautions that even Indonesians who are against human rights violations and racism in West Papua may not support independence for the restive region, given a strong nationalist sentiment throughout Indonesia.

Husein, a 25-year-old from Jakarta, who asked to go by just one name, says he joined a #PapuanLivesMatter webinar in June because he was curious about issues there. “My personal position is I’m against the repression of Papuans but I also disagree with the idea of West Papua independence,” he says.

This is not the first time a pro-independence group has set up a provisional government for Indonesian-controlled West Papua, and Indonesia has faced numerous separatists struggles.

Another separatist movement in Indonesia was successful, but bloody. In 1999, following a U.N. organized referendum, East Timor voted to secede from Indonesia and become the independent state of Timor-Leste. Between 1,000 and 2,000 civilians were killed in the months before and days immediately after the election, according to Human Rights Watch, and a U.N.-backed peacekeeping force was deployed.

Wenda says his work to bring international attention to the West Papuan cause has had success. His group was granted observer status in the Melanesian Spearhead Group, a bloc that includes Melanesian-majority nations. Vanuatu, a member of the bloc, has raised the issue of West Papua at the United Nations.

“I’m on a mission,” Wenda says. “I’ll finish my mission and then I will rest.”

Published in Asia, Editorial, Oceania & the Caribbean and World