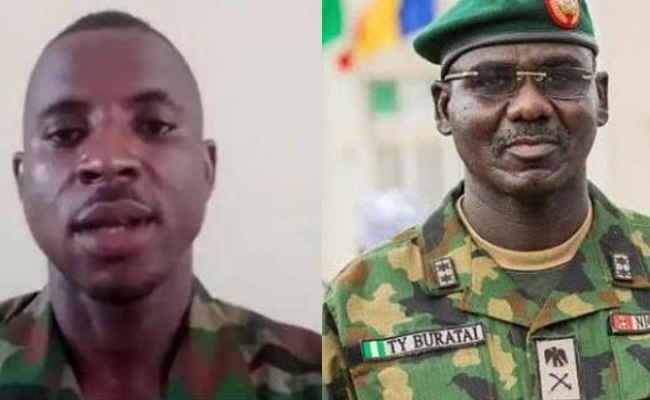 The present Nigerian government is run by an adherent of the Arab faith, Buhari. From the armed forces to most important arms of government, allegations of nepotism and bias abound as ill-equipped officials from the core North occupy sensitive top positions with hardly the credencials to show, aside from the fact that they are fellow practitioners of the Arab religion

A Nigerian army officer Lance Corporal Martins Idakpini, is undergoing severe torture at a military base in Sokoto on the orders of Chief of Army Staff, Tukur Buratai, according to an exclusive report by SaharaReporters.

Idakpini was arrested in June shortly after making a viral video castigating Buratai for the failings of the Nigerian Army to combat and destroy Boko Haram terror group.

Earlier on, precisely on September 7, 2020, SaharaReporters had reported that the military had perfected plans to court martial Idakpini.

Colonel Yabaji, head of the barracks in Sokoto where Idakpini is detained, unleashed about eight soldiers to torture him after receiving orders from Buratai.

Top army sources told SaharaReporters that Idakpini had been barred from medical treatment despite his health taking a severe dip.

Human rights lawyer, Tope Akinyode, had obtained a court order from the Abuja Federal High Court since July 22 2020 mandating the army to grant Idakpini immediate access to his lawyer and family but the army had refused to obey the order.

In August 2018, Buhari, who is also a retired military general, told a gathering of lawyers that the rule of law was subject to national security.

Many observers worry about the destiny of coming generations as today’s African leaders, largely males, exhibit dangerous levels of ignorance and disconnect, on the long term effects of foreign religions and ideologies on the African psychology