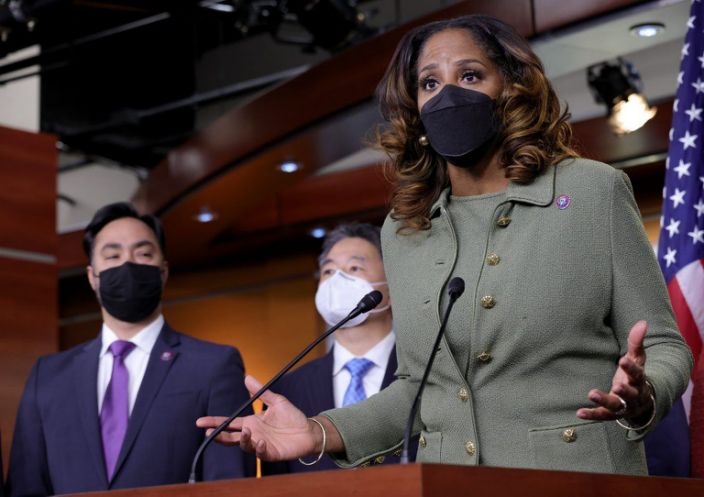 House Impeachment Manager and the Virgin Islands Rep. Stacey Plaskett spoke the truth to power after Donald Trump’s lawyers kept repeating racially-charged videos of Black women at the close of the 2nd Senate hearing on Friday. This was supposedly an attempt to disprove House Democrats’ claim that the former president incited the insurrection at the U.S. Capitol.

Trump’s lawyers, in trying to exonerate the ex-president from wrongdoing after his “fight like hell” remark instigated the Capitol riots, disingenuously showed carefully-edited videos of Black women like Stacey Abrams and California Rep. Maxine Waters saying the word “fight” during speeches.

Plaskett, upon given the podium, took time to address the racially-themed videos.

“The defense counsels could put a lot of videos out in their defense, playing clip after clip of Black women talking about fighting for a cause or an issue or a policy,” Plaskett said. “It was not lost on me that so many of them were people of color and women.”

She added: “I thought we were past that. Maybe we’re not.”

Stacey Abrams’ organization, called “Fair Fight”, is dedicated to eliminating voter suppression, which means any time she uses the word “fight,” it has always been said in that context.

Maxine Waters has no love for Trump and neither does he. However, there is no evidence to support the premise that she was trying to incite violence against the former president.

Trump’s lawyers were apparently trying to exploit anything they could lay hands on in their defense of the twice impeached ex-president. Context apparently did not matter to Trump’s impeachment lawyers.

The evidence against Trump in connection to the Capitol riots he was accused of instigating are based on cold hard facts, as Raskin observed. He was caught on camera telling his supporters to “fight like hell” and “march to the Capitol.”

“He fanned the flame of violence,” Plaskett said of Trump. “The violence was what he deliberately encouraged.”