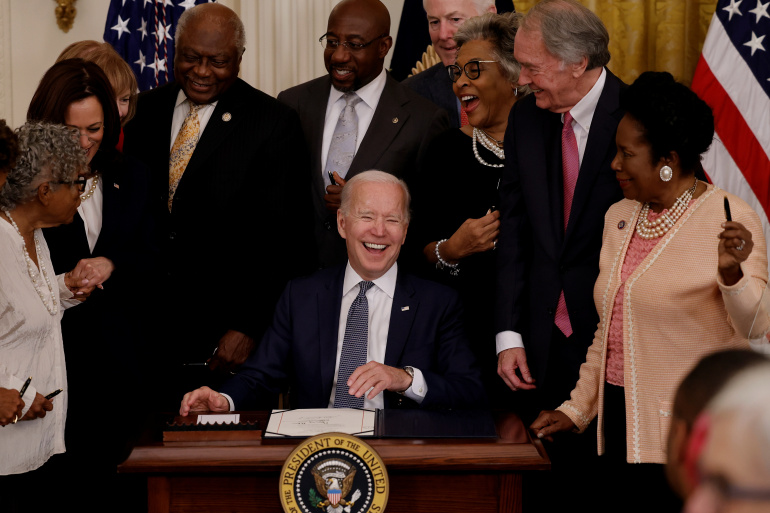 US President Joe Biden has signed a bill making June 19, a day best known as Juneteenth, a federal holiday effective immediately. The day marks the end of slavery in America.

“Today we consecrate Juneteenth for what it ought to be, what it must be – a national holiday,” said Biden, who returned on Wednesday from his first trip as president to Europe.

“This is a really, really important moment in American history. By making Juneteenth a federal holiday, all Americans can feel the power of this day and learn from our history and celebrate our progress,” Biden said.

Biden signed the bill flanked by Vice President Kamala Harris at the White House on Thursday.

“Today is a day of celebration,” said Harris, the nation’s first Black vice president. “It is not only a day of pride, it is also a day for us to reaffirm and rededicate ourselves to action.”

“Juneteeth” is a colloquial term used across centuries to commemorate June 19, 1865, the day enslaved people in Galveston, Texas, first learned from Union Army Maj. Gen. Gordon Granger that the Civil War was over, and they were free by order of the president (Lincoln, who had issued the Emancipation 2 1/2 years earlier).

Celebrations occurred every year in Texas on Juneteenth, and later spread across the South as the idea spread.

The U.S. Office of Personnel Management, which is the human resources office for the federal government, tweeted that most federal employees will observe the new holiday — Juneteenth National Independence Day — on Friday since June 19 falls on a Saturday this year.

US presidential historian Michael Beschloss lauded Biden’s signing of the bill in a tweet.

“Juneteenth should have been a federal holiday long ago,” he said.

It is the first creation of a national holiday since Martin Luther King Jr Day was established in 1983 to recognise the slain civil rights leader.

At the signing ceremony, Biden bent on one knee and embraced Opal Lee, a 94-year-old Texan who has campaigned her entire life to make Juneteenth a national holiday.

“You just received a very special recognition from the president of the United States,” Harris joked to applause among dignitaries assembled at the White House for the bill signing.

By making Juneteenth a federal holiday, “all Americans can feel the power of this day, and learn from our history, and celebrate progress and grapple with the distance we’ve come but the distance we have to travel,” Biden said.

Juneteenth as officially a national holiday has added a layer of restoration as the United States reckons with its history of racism.