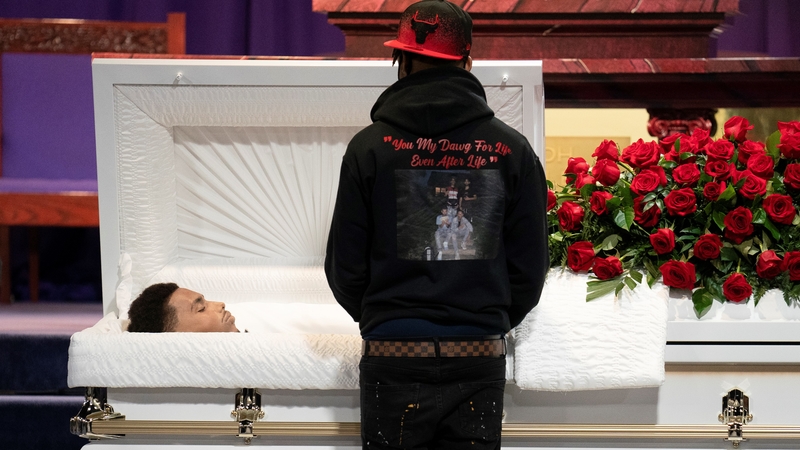 The funeral for 20-year-old Daunte Wright was held on Thursday afternoon in Minneapolis. He was one of the most recent victims of preventable police violence against unarmed Black people in America.

Rev. Sharpton, in his eulogy for Wright, whom he called the “Prince of Brooklyn Center,” referred to “a resting place … a martyr’s bench,” where the 20-year-old could take his seat next to other Black men killed in encounters with police.

“The world will never be the same,” he added, “because we are going to stand up for situations like this.”

The fatal shooting of Wright on April 11 came ahead of closing arguments in the murder trial of Derek Chauvin, the former police officer who on Tuesday was found guilty of murdering George Floyd in Minneapolis last year.

In her defense, Kim Potter, the officer who killed Wright, claimed she mistook her gun for the Taser she said she meant to deploy instead of lethal force with her service weapon.

Potter has been slapped with second-degree manslaughter charges, and could face up to 10 years in prison and a $20,000 fine if found guilty.

“The highest accountability? I know the highest is going to be being judged by God. But can we get a conviction? Can we get something? Manslaughter!” Wright’s aunt Naisha Wright exclaimed while holding up side-by-side photos of a gun and a Taser.

She bemoaned the anti-Black racism going on in the U.S. and the murder of Black men “because of the colour of our skin.”

“I never imagined that I would be standing here,” Katie Wright, Daunte Wright’s mother, said during the funeral. “The roles should completely be reversed. My son should be burying me.”

Wright was born in St. Paul, Minnesota, and moved to Minneapolis at age 7, according to the obituary included in the funeral program. He attended Edison High School, where he excelled at sports and played basketball, the obituary said.

Wright was a “warm and loving person who would do anything for his family and friends,” it said. He loved the Fourth of July, when he would gather with his family and light fireworks. And he became a father in 2019, when his son, Daunte Wright Jr., was born.

“Our heart is broken with yours as we come to lay him to rest,” Crump told Wright’s parents. “But, most importantly, we celebrate his life, and we define his legacy once more: Daunte Wright’s life mattered.”

Hundreds of mourners, many wearing facemasks due to the coronavirus pandemic, gathered at a historically black church in the north of the city on Thursday afternoon to remember Mr Wright.

Mourners included the Democratic governor of Minnesota, Tim Walz, who issued a proclamation calling for a statewide moment of silence during the first two minutes of Mr Wright’s funeral from noon. The edict linked Mr Wright’s death to “deep, systemic racism”.