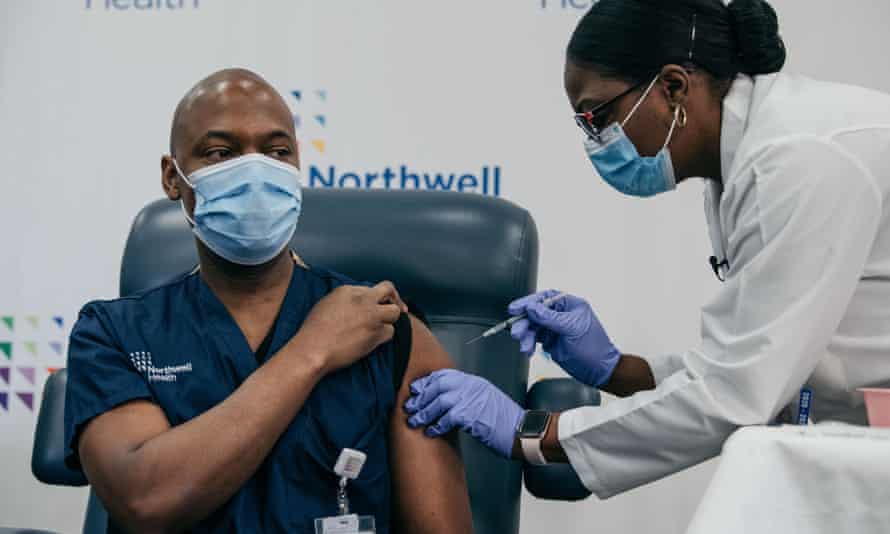 This week, the face of COVID-19 vaccinations has been Black ones, with African American health care professionals from various states serving as “the first” in their areas to get the vaccinated.

While many gave rounds of applause, believing this is the “beginning of the end” of the pandemic, some say it is just a ploy to trick African Americans into be the first “guinea pigs” to test the vaccines.

But is that mistrust going too far?

It could be. It could be just sheer coincidence that Black nurses were showcased on television as being the first brave and trusting souls to be vaccinated, or it could be a marketing tactic– rather than a ploy — to encourage other Blacks to take the shots when they become available because of the distrust of the government and medical community many already have.

COVID-19 has been killing our community! The virus is impacting a disproportionate number of African Americans, in terms of hospitalizations and death. And unlike President Donald Trump who says he felt like Superman after being treated for COVID-19 at Walter Reed Medical Center, Blacks and Hispanics don’t have access to the resources the leader of the free world does.

According to a Kaiser Family Foundation study, nearly a third of African Americans are hesitant to get the vaccine. The majority say they are concerned about possible side effects, half are worried they will get the virus from taking the vaccine, and 48% say they just have a general distrust in vaccines altogether.

But doctors are urging people to put those fears aside, warning that the vaccine won’t kill you, but COVID-19 can!

The side effects are causing a few red flags, however.

The FDA confirmed that four volunteers in Moderna’s clinical trial developed the neuromuscular disease Bells Palsy. Three were in the vaccine group and one was in the placebo group, but all are doing OK now.

The second worker experienced eye puffiness, lightheadedness, and a scratchy throat within 10 minutes of receiving the injection.

In both cases, the subjects had to be treated with Epinephrine, which is a hormone and medication used to treat severe asthma attacks and allergic reactions (including anaphylaxis).

Gupta says doctors and clinics should make sure they have both Epinephrine and Benadryl on hand for patients.

But with less than a year to develop, test and distribute, is it too soon to trust the vaccine? Are we so desperate for a “miracle cure” for the deadliest pandemic to hit the world within the last 100 years that we are “rolling up our sleeves” to be injected — WITH HOPE?

Historically, doctors and scientists have used African Americans in medical studies without their permission. We can never forget the Tuskegee Experiment and the unlawful distribution of cells from Henrietta Lacks.

In 1932, the Public Health Service, working with the Tuskegee Institute, began a study to record the natural history of syphilis in hopes of justifying treatment programs for blacks. It was called the “Tuskegee Study of Untreated Syphilis in the Negro Male.”

The study initially involved 600 black men – 399 with syphilis, 201 who did not have the disease. The study was conducted without the benefit of patients’ informed consent. Researchers told the men they were being treated for “bad blood,” a local term used to describe several ailments, including syphilis, anemia, and fatigue. In truth, they did not receive the proper treatment needed to cure their illness. In exchange for taking part in the study, the men received free medical exams, free meals, and burial insurance. Although originally projected to last 6 months, the study went on for 40 years. The men were never given adequate treatment for their disease. Even when penicillin became the drug of choice for syphilis in 1947, researchers did not offer it to the subjects.

In Lacks’ case, she will forever hold her place in history as the woman whose cancer cells became the first immortalized human cell line, even though she had no knowledge of it.

During her cancer treatments, two samples were taken from Lacks’ cervix without her permission. One sample was of healthy tissue and the other was cancerous. The cells from the cancerous sample eventually became known as the HeLa immortal cell line, a commonly used cell line in contemporary biomedical research.

Lacks died at the age of 31 from cancer. After it was discovered about her “contribution to cancer research,” her family made a headstone for her grave that reads: “In loving memory of a phenomenal woman, wife and mother who touched the lives of many. Here lies Henrietta Lacks (HeLa). Her immortal cells will continue to help mankind forever.”

It’s because of those types of historical betrayals that Blacks are leery to be first in line for the vaccines. A Pew study revealed recently that Black people are less inclined to get vaccinated than any other racial and ethnic group with only 42% of Black respondents surveyed saying they intended to be vaccinated, compared with 61% of white people.

Just like the Black nurses who were vaccinated publicly, former President Barack Obama said he will do the same to boost confidence for those in need. Will that help others let their guards down?