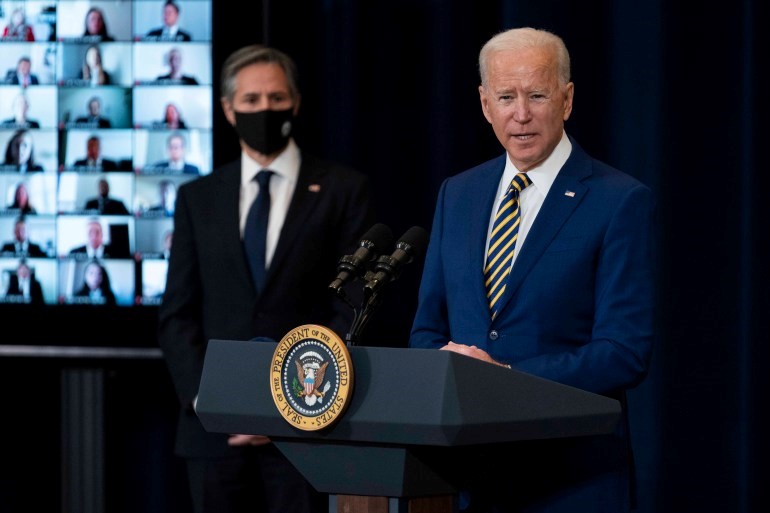 The US has sanctioned 24 officials from Hong Kong and China in a show of displeasure over Beijing’s crackdown on Hong Kong, just ahead of US Secretary of State Antony Blinken’s meeting with top Chinese diplomats in Alaska.

The US made the announcement during a joint visit by Blinken and Defense Secretary Lloyd Austin to Japan and South Korea.

According to a CNN report, the sanctions were introduced by the US under the auspices of the Hong Kong Autonomy Act, which was passed last year after Beijing ratified a new, more restrictive national security law in Hong Kong.

The US sanctions bar those on the list and their families from traveling to the US. Furthermore, being sanctioned under the HKAA also comes with financial penalties, including restrictions on banking and loans with US financial institutions, and limits dealings the individual can have with US financial or property entities, Business Insider reports.

Foreign financial institutions that deal with the 24 officials would be subject to U.S. sanctions, the State Department said.

According to AP, the planned changes to Hong Kong’s electoral law give a pro-Beijing committee power to appoint more of Hong Kong’s lawmakers. The move will reduce the proportion of those directly elected and ensures that only those determined to be truly loyal to Beijing are allowed to run for office — effectively shutting opposition figures out of the political process.

A senior official, who briefed reporters on condition of anonymity, said the two sides would not deliver a joint statement and no major announcements were expected.

President Joe Biden’s government appears to committed to taking a tough line on those Chinese Communist Party officials, borrowing a leaf from his predecessor, Donald Trump.

Blinken said in a statement that the sanctions had been put in place in response to Beijing’s new crackdown on Hong Kong’s democratic processes, which restrict the right of Hong Kong’s people to run for election to the city’s legislative council.

In addition, he said that the sanctions underscore “our deep concern with the National People’s Congress March 11 decision to unilaterally undermine Hong Kong’s electoral system.”

“The United States stands united with our allies and partners in speaking out for the rights and freedoms of people in Hong Kong, and we will respond when the PRC fails to meet its obligations,” he added.

Meanwhile, China has rejected all criticism of its policies toward Hong Kong, accusing foreign governments of interfering and saying political tightening was necessary following months of anti-government protests in 2019.

Speculations are rife Beijing could call off the meeting in Alaska in response to the sanctions.