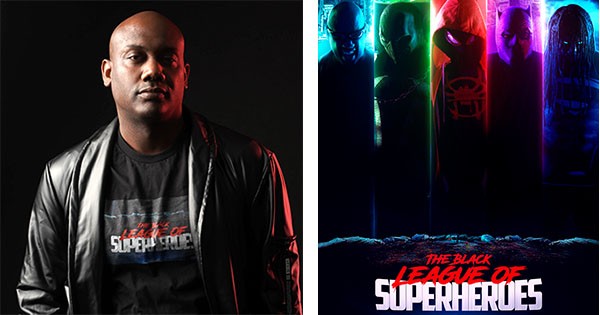 Marcus Nel-Jamal Hamm, a former pro-wrestler turned filmmaker, is sending a powerful message about the importance of Black representation.

Former pro wrestler turned writer, director, actor and producer, Marcus Nel-Jamal Hamm, will be releasing his anticipated short film, The Black League of Superheroes, available to watch on April 30th through the film’s website and via YouTube.

Marvel and DC enthusiasts will enjoy following the story of a young hero, Miles Morales Spiderman, who discovers that an intentional injustice was covered up as an accident. To prevent this from happening again, he takes advantage of his gifts and “borrows” a powerful glove to summon his elders: Spawn, Blade, and Black Panther. The band of superheroes must then decide how to best address the tragedy that has unfolded before them.

With the current political climate and the ascent of the Black Lives Matter movement, Marcus was inspired to create a film where Black individuals can see themselves reflected as superheroes.

“Being able to create positive Black images is extremely important in times like this, and it’s also important for Black people who are being victimized and brutalized from mischaracterizations to regain a sense of empowerment,” Marcus explains.

Among the aforementioned superheroes, audiences will also see fan favorites including Superman, Storm, and Bayne.

The release date of the film is April 30, 2021, and it can be viewed online for free at BlackLeagueofSuperHeroes.com

Born in Washington D.C. and a graduate of the University of Maryland College Park with a Bachelor of Arts Degree in Criminal Justice, Marcus Nel-Jamal Hamm emerged into the entertainment scene through the world of pro wrestling under the moniker of Marcus Jordan. He is a multi-title holding main event performer.

Marcus transitioned toward acting with a role on two episodes of the HBO series, The Wire. He’s continued to gain momentum working as a television, theatrical and commercial actor, and is trained in film/TV stunt fighting.

This June, Marcus will be producing and starring in Heaven’s Revenge, the full-length feature of the hit short of the same name (which he also stars in and can be seen on Amazon Prime).

Now an L.A. mainstay, Marcus is an advocate for global world peace and a promoter of a new Urban Renaissance where he inspires youth from all walks of life.