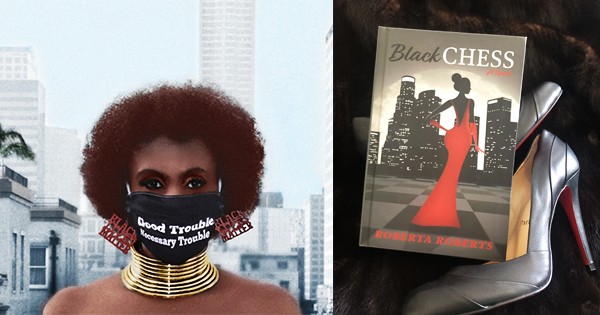 AMERICA (Black News) – The murders of Black Americans at the hands of law enforcement officials have compelled author Roberta ‘Robbie’ Roberts, pseudonym, to pen 280+ pages of fiery prose, released in the latter part of 2020 as her debut Black Chess: A Novel, the story of intellectual Black women who, in the wake of the Freddie Gray murder, decide to advocate for social justice.

Black Chess addresses the trauma and raises some of the questions that have been circulating, weighing on the hearts, minds, and consciences of America’s Black community and those in society who choose to align themselves. The author’s writing style is concise, dialogue-driven, and like a film treatment, suitable for script and film adaptation.

In the United States, Black Americans are slain by police without the benefit of remaining innocent until proven guilty. George Floyd was executed on suspicion of passing a fake $20 bill, while the act of his brutal murder and his murderer were captured on video. The trial and subsequent murder conviction on all charges of Minneapolis police officer, Derek Chauvin, brought a moment of celebration. Yet, in that moment of celebration, we were again blindsided by the video of 15-year-old Ma’Khia Bryant, a child being fatally gunned down by police while in the custody of Columbus Ohio’s Franklin County Children’s Services foster care system. And, days later, Andrew Brown, Jr. shot dead while unarmed in Elizabeth City, North Carolina by a Sheriff’s deputy. This Black death toll that has been caught on video via dashcam, body cam, and cellphone camera is too real for comfort, happens too often to be denied, and has made advocates of everyday Americans who are eager to put an end to this injustice.

Black people, like everyone else, want success and are looking for healthy love relationships. In the pursuit of happiness, we are denied equity, even when we do our best to follow rules. Yet, we won’t be deterred by these rules (or laws) that are in place as brick walls, roadblocks, and detours set up to discourage or prevent us from reaching the American Dream. This country invites citizens to share in the American Dream but discriminates when you are Black. We understand this but refuse to accept this or remain discouraged, evident in how we never stop fighting our way to prosperity.

Up until now, it could have been argued that half of the United States wants to make America white again, while most liberals dare not acknowledge any racial disparities. On March 4th, lawmakers in the House of Representatives passed the George Floyd Justice in Policing Act, as a measure of meaningful reform, the bill (currently stalled in the Senate) would ban no-knock warrants, ban chokeholds, and eliminate qualified immunity for law enforcement.

About Black Chess: A Novel
Black Chess is set around the time of the 2016 Presidential Election on the heels of the Freddie Gray murder in Baltimore, Maryland. Protagonist, Celeste, and her two sistahs, Bianca and Kennedy, three educated Black women, venture from Los Angeles to Baltimore in outrage to advocate for justice for Freddie Gray and volunteer their talents to the cause. In their travels, Celeste, Bianca, and Kennedy open dialogue everywhere they go and challenge the ideas of everyone they meet, hoping to get to the why at the bottom of it all. Why are we black people still experiencing racial injustice in this day and age? The women challenge those who are activists, thought leaders, law-abiding citizens, legal professionals, responsible parents, singles, those who are religious, those with morals and values, all while urging others to get involved somehow.

Though these ladies are of different backgrounds, classes, religions, and schools of thought, they are united in their outrage. Readers are impressed with their different perspectives, aimed at understanding what Black people are going through as a community and some of the many causes, going back to the Willie Lynch papers, the American Revolution, and the very principles this country was founded upon. All told, these theories stir into a compelling brew, used as fuel to support their arguments for what all of us must do to fix these issues, and why we must continue to fight. As these Black women break down the idiosyncrasies of politics, the importance of advocacy, and the role we play as individual voters in America, readers learn why it is mandatory for those of us who are Black in America to exercise our right to vote in every election, the primaries, congressional run-offs, and even the school boards. Readers who may not have understood part of it or all of it are shown the bigger picture with clarity.

At its best, Black Chess echoes the sentiments caused by the atrocities that have brought our community so much distress. At its worst, Black Chess is a didactic refresher course on politics, i.e. the three branches of government and voting rights, made simple when presented through this novel’s biting dialogue.

“Do we really have the power to create the life of our dreams? Black women face racism, sexism, rejection by Black men, self-esteem issues, colorism, and our femininity questioned by society.” — (Black Chess: A Novel by Roberta Roberts, Queens Chapter)

Black Chess is a body of work containing the most poignant dialogue on social injustice, organized in a way that breaks down the complexities of politics as if it were a game strategy. For a community that is always on the precipice of injustice, especially when our frustrations reach a fever pitch, let Black Chess serve as a reminder. Never underestimate the power of the Black queen.

About the Author
Roberta ‘Robbie’ Roberts (pseudonym) is a human rights advocate and civil rights activist, living in Southern California. She grew up in the San Francisco Bay Area among activist communities. Marriage to an ex-professional athlete battling addictions proved to be tumultuous, crushing every aspect of her life and leaving her soul feeling empty. Robbie separated . . . heartbroken, helpless, hopeless, and then eventually, homeless, though surrounded by wealth. Looking to survive the devastation (with a toddler in tow), she turned to journal writing for its cathartic value. Robbie eventually decided storytelling was the best way to share wisdom gained through her struggles, knowledge about life, contemplation of the Universe, and her fight for the liberation of Black people. Robbie now chooses to form her identity by embracing the wonderful present, as opposed to reliving her painful past. Roberta Roberts writes under a pen name for the benefit of loved ones.

“If you have been traumatized or left feeling powerless, watching how beautiful Black people are being treated in America, you are not alone. Author Roberta Roberts has brilliantly presented a strategy in the form of her debut novel, Black Chess. Black Chess is our pain, spit-fire wisdom, and solutions wrapped up in dialogue that is nothing short of break-neck intellect, cascading from the stars on Orion’s Belt. Readers will see themselves, hear themselves, and understand the responsibilities we must commit to if we hope to change this game Black people were never intended to win. I implore each of us who have felt the sting of social injustice to read this book multiple times and recommend it to many others.” — Eartha Watts Hicks, author of Love Changes, selected for 2013 NYCHA/NAACP Literary Game-Changer Award in Fiction

For more information and/or to purchase the book, visit UraeusPress.com.

Also be sure to follow Roberta and her book on social media: