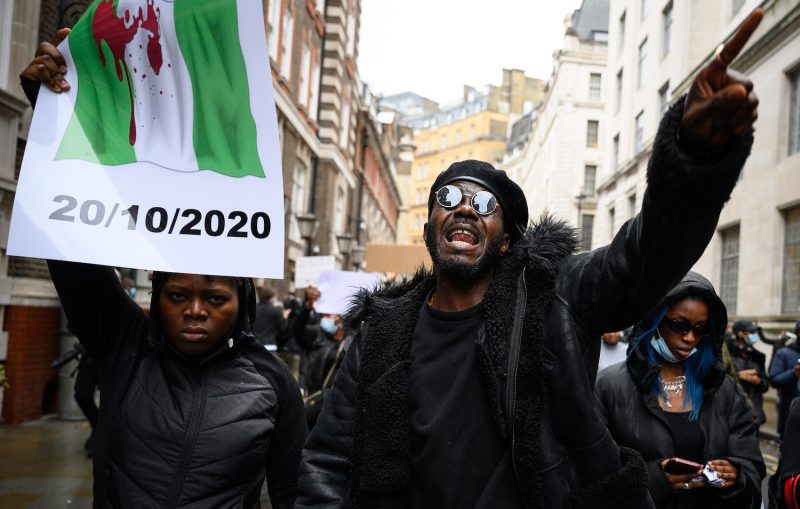 US, UK, Foreign Governments Are Aiding Nigeria’s Violence Against Protesters!

The suppression of protests against police brutality wouldn’t have been possible without arms and training from abroad.

Young protesters had been singing the national anthem and waving the Nigerian flag when the Nigerian Army began shooting at them in a wealthy part of Lagos on Oct. 20. At least 12 people were killed at the Lekki Toll Gate and Alausa, according to human rights group Amnesty International. At least 69 people have died across the country since protests began against police brutality on Oct. 8.

“There is little doubt that this was a case of excessive use of force, resulting in unlawful killings,” said the United Nations’ high commissioner for human rights, Michelle Bachelet. In a statement shortly after the incident, Joe Biden, now the U.S. president-elect, declared that “the United States must stand with Nigerians who are peacefully demonstrating for police reform.”

Rather than respond to calls for an investigation, Buhari imposed a curfew on Lagos and other areas with increased military presence to crack down on dissent.

Lagos state officials launched a judicial panel of inquiry into the supposedly disbanded Special Anti-Robbery Squad (SARS)—the unit that provoked the protests—and the shootings with a six-month mandate. But Nigerians are acutely aware that there will likely be no sanctions against the officers who gunned down unarmed citizens. There was no accountability for police after the shooting of at least 11 Muslim protesters in the Nigerian capital, Abuja, in 2019, or the Army’s killing of at least 21 people northeast of the capital in 2018.

Buhari’s statement in the wake of the Lekki massacre did not help matters. “Sadly, the promptness with which we have acted seemed to have been misconstrued as a sign of weakness,” he said in a televised address that made no reference to the shooting. “This government … will not allow anybody or groups to disrupt the peace of our nation,” added the former military strongman.

Rather than respond to calls for an investigation, Buhari imposed a curfew on Lagos and other areas with increased military presence to crack down on dissent. Nigeria’s central bank froze the accounts of activists upon court order.

This is why Nigerians are calling for world leaders to do more than dole out empathetic statements. It is crucial that international governments ensure accountability for the deaths of anti-SARS protesters—especially because they have had some links to the training of these officers.

The United States made nearly $19 million worth of military sales of defense education and technical training to the Nigerian Army and police between 2015 and 2019, according to unclassified reports made to U.S. Congress. These trainings ranged from military civilian control, adherence to human rights, and military professionalization.

In total, just over $38 million worth of training was provided over the past five years to Nigerian security officials, a substantial amount partly funded by U.S. taxpayers.

Officers from the Prince William County Police Department in Virginia trained members of the Nigeria Police Force on human rights in 2017. Three years later, Prince William County police officers acknowledged using tear gas and rubber bullets against a peaceful protest held in response to the death of George Floyd. So it was no surprise that on multiple occasions Nigerian police also fired tear gas at peaceful protests against police brutality in the Nigerian capital. More than 7,000 people were killed by U.S. police between 2013 and 2019, and officers seldom face any legal consequences. Similarly, the Nigerian Army and Nigeria Police Force they helped train are notorious for killing civilians with impunity.

U.S. funding for foreign police training expanded from $4.3 million in 2001 (the first year reliable data exists) to $146 million in 2018, according to Benjamin Kenzer, a researcher in the political science department at Ohio State University.

Kenzer found that Nigerian police were often trained alongside members of the Nigerian Army. His research shows “the more training [police] get, there is a small but noticeable effect that it’s more likely that police will harm average, everyday citizens,” he told Foreign Policy. “Police develop mentalities and energies that resemble the military.”

The greatest increase in funding was between 2016 and 2018 during the Trump presidency,” he added. That may have been due to less stringent observation. “These programs tend to fly really under the radar,” he said. The Democratic Republic of the Congo, Niger, Somalia, Sudan, Mali, Morocco, and Nigeria were the top African countries to receive police training from the United States, according to Kenzer’s research. All are countries where state actors have been accused of serious human rights abuses. In particular, Moroccan police repeatedly denied allegations of extrajudicial killings until a June 2019 video emerged showing policemen severely beating two unarmed activists.

But it’s not just the United States that has trained Nigerian police. British officials trained and supplied equipment to the SARS unit between 2016 and 2020, according to a letter sent to British Labour Party member of Parliament Kate Osamor.

British officials trained and supplied equipment to the SARS unit between 2016 and 2020, according to a letter sent to British Labour Party member of Parliament Kate Osamor.

A Freedom of Information request revealed that the College of Policing—the professional body for police in England and Wales—had also trained Nigeria’s security officers during 2019, the Independent reported. It found that the College of Policing had made almost 20 million pounds ($27 million) from international training since 2013. Other governments it offered training to included Hong Kong and Rwanda, where there has been equal criticism of police brutality. Tactics used by officers during Hong Kong protests breached human rights laws. Allegations of unlawful shootings have dogged Rwandan officers, including killing at least 12 refugees protesting a cut in food rations.

The ostensibly disbanded SARS was infamous for robbing citizens, torture, rape, unwarranted arrests, and unlawful killings. It was formed in 1992 to tackle a rise in armed robbery, but operated entirely unchecked. Previous protests had led to similar announcements that the unit would be reorganized in 2017, restructured in 2018, and disbanded in 2019. A video showing military-style combat training of the Special Weapons and Tactics (SWAT) team—the new squad that will replace SARS—left Nigerians doubtful that police brutality of citizens would end.

Buhari has once again pledged police reforms, including psychological evaluation for officers and a pay raise so they would not resort to bribery and extortion. In 2018, police officers earned a yearly salary of $1,700  and most bought their own uniforms. In comparison, Nigerian senators have a monthly expense allowance of more than $37,000, in addition to a yearly constituency budget of $5.5 million meant for grassroots projects but often plagued by contract fraud, according to the Nigerian government’s own report. Such is the level of corruption that permeates the country’s elite. As another Foreign Policy report revealed recently, more than 40 percent of Nigerian police are not actually protecting the public, but deployed to protect VIPs from the public.

As the #EndSARS hashtag stopped trending globally earlier this month, Amnesty International warned about escalating violence in the country. The next U.S. administration will need to change tack if Nigerian authorities are going to take human rights violations seriously—and it should start with military and training assistance to police. Recent events are not encouraging.

Hours before the Nigerian military fired on protesters, a U.S. delegation arrived in Abuja to finalize sales of military fighter jets to the country, the Wall Street Journal reported. “We need to think about, if the United States insists on being this involved in the world, how the U.S. can equally empower citizens,” said Kenzer. Helping to launch civilian review boards of police training similar to those implemented in the wake of Black Lives Matter protests could be one way, he said.

Biden’s win raised eyebrows among Nigerians. Buhari congratulated the president-elect, urging “greater engagement with Africa on the basis of reciprocal respect.” The anti-SARS protests could be an early litmus test of whether U.S. foreign policy toward Nigeria will listen to the demands of its citizens rather than its rulers. Issuing U.S. visa bans and other measures against officials involved in the Lekki massacre is not impossible.

Biden could impose an arms freeze—a move he signaled to human rights violators during his election campaign. “We will make clear that America will never again check its principles at the door just to buy oil or sell weapons,” Biden told the Council on Foreign Relations last year when asked about the Saudi government’s killing of journalist Jamal Khashoggi.

Biden could impose an arms freeze—a move he signaled to human rights violators during his election campaign.

The administration of former U.S. President Barack Obama repeatedly blocked arms sales to Nigeria, including an Israeli sale of U.S.-built attack helicopters, because of human rights abuses by the Nigerian military. Shortly after, public anxiety about terrorism benefited Buhari’s call for a policy shift, and under U.S. President Donald Trump in 2017, Nigeria finalized a deal to pay $593 million for U.S. arms and jets to fight Boko Haram.

Another move, strongly advocated by Nigerians, would be targeted sanctions such as use of the Global Magnitsky Act, which imposes visa restrictions to enter the U.S. on alleged human-rights abusers and freezes their U.S. assets.

A Biden administration could choose not to heed those calls. Yet it would be indefensible for the U.S. government to continue finalizing helicopter sales while Nigerians are dying in the fight against police brutality.