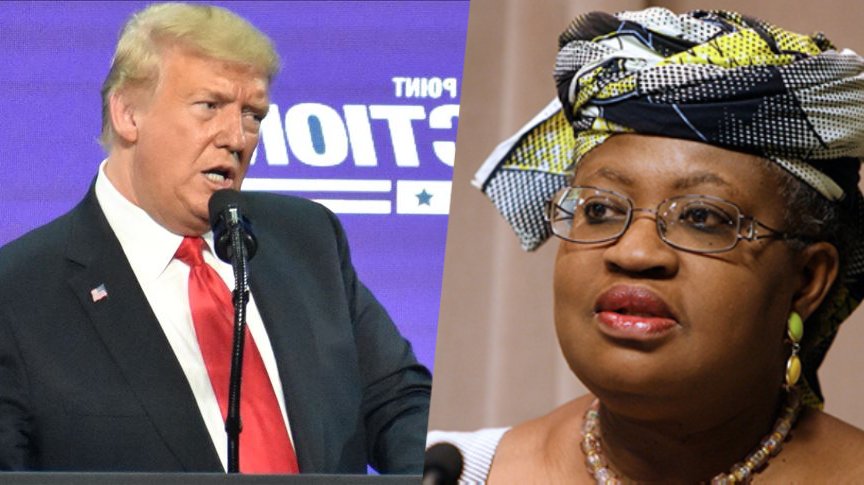 Madam Ngozi Okonjo-Iweala, Nigeria’s candidate for the World Trade Organization job, would have been confirmed as the head of the WTO by now had the U.S. not block the move. Mrs Okonjo-Iweala and South Korean Trade Minister Yoo Mying Hee are the last of the two candidates from over a dozen others contending to secure the top job.

Mrs Okonjo-Iweala has been endorsed by the majority of the EU member states as she is well qualified for the position. She will be the first African and first female director-general of the international body in its 25-year history if she clinches the job.

The last-minute turnaround of the Trump-led US Government has raised eyebrows among some quarters, as the selection process that was supposed to be finalized on Wednesday has now been prolonged.

According to reports, Okonjo-Iweala, who formerly held the No. 2 post at the World Bank, had amassed wide support among African countries and secured around 80 votes, or half of the organization’s members, by mid-October. More recently, she gained the backing of the 27 European Union members, all but clinching victory.

But Washington’s rejection in favour of Yoo Mying Hee has stalled the proceedings.

“One delegation could not support the candidacy of Dr. Ngozi and said they would continue to support South Korean minister Yoo. That delegation was the United States of America,” WTO spokesman Keith Rockwell told reporters at the group’s headquarters in Geneva after the closed-door meeting.

The WTO’s decision-making process is based on consensus, and either candidate will need to win the blessing of all 164 members.

In a statement critical of the WTO, the Office of the US Trade Representative, which advises President Donald Trump on trade policy, said the organisation “must be led by someone with real, hands-on experience in the field”.

Ms Yoo had “distinguished herself” as a trade expert and “has all the skills necessary to be an effective leader of the organisation”, the statement said.

It added: “This is a very difficult time for the WTO and international trade. There have been no multilateral tariff negotiations in 25 years, the dispute settlement system has gotten out of control, and too few members fulfill basic transparency obligations. The WTO is badly in need of major reform.”

The WTO has called a meeting for 9 November – after the US presidential election – to discuss the issue. US opposition does not mean the Nigerian cannot be appointed, but Washington could nevertheless wield considerable influence over the final decision.

The US has more or less built a reputation of opposing African candidates in global positions. Mrs Okonjo-Iweala’s situation is reminiscent of Donald Trump’s administration’s severe opposition and criticism of  the World Health Organization, which is led by Director-General Tedros Adhanom Ghebreyesus, a former Ethiopian foreign minister. The White House repeatedly criticized Tedros as being pro-China and ultimately announced a U.S. withdrawal from the WHO due to the group’s “alarming lack of independence” from China.

A similar scenario was when the United States slapped sanctions and a travel ban on Gambian female ICC lawyer Fatou Bensouda for daring to investigate US war crimes in Afghanistan.

The popular narrative behind the United States’ refusal to support Mrs Okonjo-Iweala is because, like Ethiopia, Nigeria is a heavy recipient of Chinese economic aid. And China is the US’ biggest economic rival.

The narrative comes as a surprise because Mrs Okonjo-Iweala has lived many years in the Washington suburbs due to her 25-year career at the World Bank.

In fact, the Harvard-educated Mrs Okonjo-Iweala – nominated by her native African country – obtained American citizenship in 2019 and has dual nationality with Nigeria.

Mrs Ngozi Okonjo-Iweala is a Nigerian-born economist and international development expert. She sits on the Boards of Standard Chartered Bank, Twitter, Global Alliance for Vaccines and Immunization (GAVI), and the African Risk Capacity (ARC).

Mrs Okonjo-Iweala had a 25-year career at the World Bank in Washington DC as a development economist, rising to the No. 2 position of Managing Director.

She served as Nigeria’s first female finance and foreign minister.

During her first term as Minister of Finance under President Olusegun Obasanjo’s Administration, she spearheaded negotiations with the Paris Club that led to the wiping out of US$30 billion of Nigeria’s debt, including the outright cancellation of US$18 billion.

The World Bank veteran described herself as a reformer and said she has strong political and negotiation skills.

“I’m a good listener, and you need listening skills to make this work,” she said. “I’m pragmatic, and I’m solutions-oriented.”

According to reports, Washington’s opposition creates a tricky situation for its ally Japan. Tokyo had been wary of Mrs Okonjo-Iweala’s rival candidate, fearing that a Yoo-led WTO may rule in favor of South Korea in its many trade disputes with Japan.

Irrespective of who wins in the end, Mrs Okonjo-Iweala or Yoo would be the first woman to lead the Geneva-based trade body.