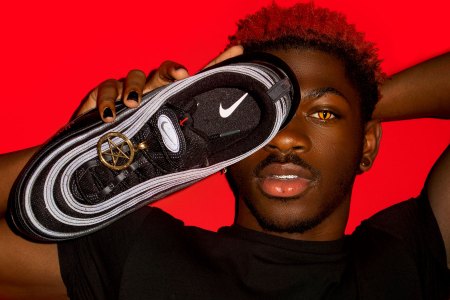 Nike has gotten a restraining order blocking the sale of controversial Lil Nas X’s “Satan Shoes,” at least for now according to CBS.

A United States federal judge has sided with sportswear giant Nike Inc in ordering a company in New York to temporarily stop further sales of “Satan Shoes” it produced in collaboration with the rapper Lil Nas X.

Musician Lil Nas X collaborated with streetwear company MSCHF on a quickly sold-out offering of what the company dubbed Satan Shoes. They not only have a devil-focused theme, but contain a drop of human blood (drawn from MSCHF employees), the company confirmed to NBC.

On Monday, 665 pairs of the devil-themed sneakers, priced at $1,018, sold out in just one minute. Fans were able to enter a giveaway to win the final, 666th pair of shoes, but lawyers said the raffle is currently on hold.

According to Reuters, the shoes are customised versions of the Nike Air Max 97 sneakers that purport to contain one drop of human blood in the midsoles and are printed with “Luke 10:18,” a biblical passage referring to Satan’s fall from heaven.

Nike says some customers are now boycotting the brand online for its apparent association with Satan. The company wants MSCHF to stop all orders currently in transit and recover them.

During the court hearing, MSCHF’s lawyers had argued that the Satan Shoes were “not typical sneakers, but rather individually-numbered works of art,” following on the company’s “Jesus Shoes” based on the same Nike model in 2019.

They said a temporary restraining order was unnecessary because shoe buyers would not think Nike was involved, and all but the 666th pair had already been sold and no more were being made.

Last month, Lil Nas X released a devil-themed video for his song Montero (Call Me By Your Name).

The video, coupled with the “Satan shoes,” has seen many criticise Lil Nas X for what they deem to be “Satan worship.”