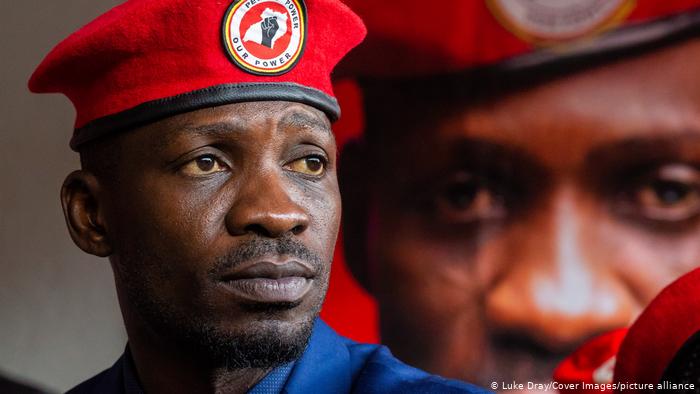 According to Daily Monitor, after the hearing of submissions by both Kyagulanyi and Museveni lawyers, the court adjourned for a few hours to give a ruling on the application.

Upon resumption of the court at 4pm, Justice Stella Arach Amoko who read the unanimous ruling, dismissed Mr Kyagulanyi’s application on grounds that the issues he intended to add to the petition had already been included in the original petition.

The justices advised Mr Kyagulanyi’s legal team led by Mr Medard Lubega Sseggona to file evidence by affidavits to prove the grounds they raised in the original petition.

Wine and his legal team had argued that Museveni was illegally nominated for presidential elections since he is the head of state, head of government, commander in chief and chairperson of the National Security Council.  Mr Kyagulanyi’s legal team had pleaded that articles 102 (2) (b) and 219 of the Constitution bar a person holding such positions from running for president.

The justices, however, said they could not allow Mr Kyagulanyi’s new ground in the intended amended petition. The court reasoned that the amendment of the petition was a new issue brought up after the lapse of the mandatory 15 days within which a petitioner can challenge a presidential election from the date results are declared by Electoral Commission (EC).

Wine’s lead counsel Mr Sseggona, during the hearing, asked court to allow the amendment of the petition, saying it would enable the judges effectively probe the alleged issues in interest of justice.

Mr Sseggona argued that immediately after the election, Mr Kyagulanyi was placed under house arrest and released only five days to the deadline for filing a presidential election petition.

He said the confinement constrained Kyagulanyi and denied him enough time to gather more evidence.

“If allowed, the respondents (accused parties) will be allowed to respond on all matters in controversy and it would enable the court to adjudicate on all matters effectively and arrive at a just decision,” Mr Sseggona submitted, adding that they were aware of the need for a speedy hearing of the petition required by law but it should be the undertaking of all parties.

Mr Museveni’s lead lawyer, Mr Ebert Byenkya objected to Mr Sseggona’s assertions saying they were misconceived because Mr Kihika swore the affidavit in his capacity as a director of NRM, a party which sponsored Mr Museveni in the election.

He asked court to dismiss Mr Kyagulanyi’s application for amendment of the petition on account that it is time-barred and the law governing presidential election petitions does not provide for amendments.

“There are rules governing determination of presidential election petitions and provide for fixed number of events; that is filing, service in two days, answer in three days and hearing in a very fixed timeframe. The time for hearing is upon us as of tomorrow,” Mr Byenkya submitted.

The counsel for the Electoral Commssion, Mr Joseph Matsiko, argued that the amendments presented by Mr Kyagulanyi raised new cause of action which is untenable under the law.

The court has set tomorrow for the pre-hearing session on the petition where both parties will agree on the issues to be determined by the judges.