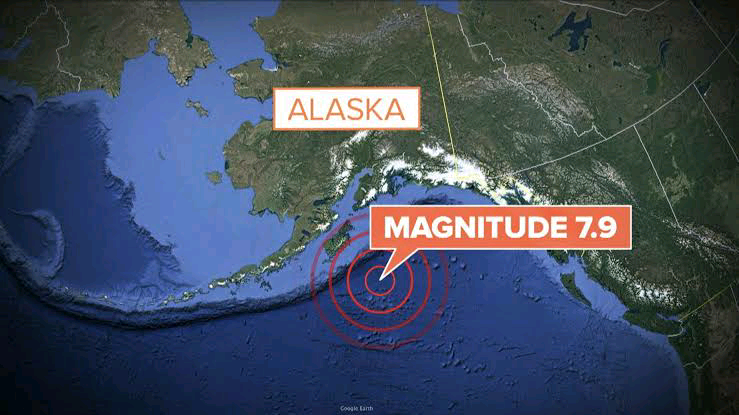 A powerful earthquake struck off  the Alaskan Coast causing prolonged tremors, which prompted tsunami warnings with people scrambling for shelter.

According to the U.S. Geological Survey (USGS), the very strong quake measured as a magnitude 8.2 and hit about 90 km east southeast of Perryville.

At 32 km deep, the earthquake was considered shallow, with shaking felt through the Alaska Peninsula and Kodiak, the largest town on the island of Kodiak.

The USGS reports that there have been at least two strong aftershocks including a magnitude 6.2 and magnitude 5.6.

The U.S. National Tsunami Warning Center issued warnings for South Alaska and the Alaska Peninsula, from Hinchinbrook Entrance to Unimak Pass, and for the Aleutian Islands from Unimak Pass to Samalga Pass, Alaska.

“A tsunami has been confirmed and some impacts are expected,” the National Tsunami Warning Center said.

Police officials in Kodiak urged residents to move to higher ground, adding that the high school in the area was open as an evacuation location. Residents only reported minor damage. The biggest wave of just over a half foot was recorded in Old Harbor, Alaska.

The tsunami watch that was issued for Hawaii was later canceled.

“Based on all available data there is no tsunami threat,” the NWS said, adding that the level of tsunami danger was being evaluated for other U.S. and Canadian Pacific coasts in North America.

Residents living in coastal areas of British Columbia waited anxiously for the local tsunami risk, with about 800 people from Kitimaat Village reportedly moving to higher ground as a precaution during the overnight hours.

All tsunami advisories and warnings were lifted by early Thursday morning.According to USGS data, this was one of the most powerful quakes in U.S. and Canadian recorded history, and the largest since 1965.

Published in Europe and NatureWatch