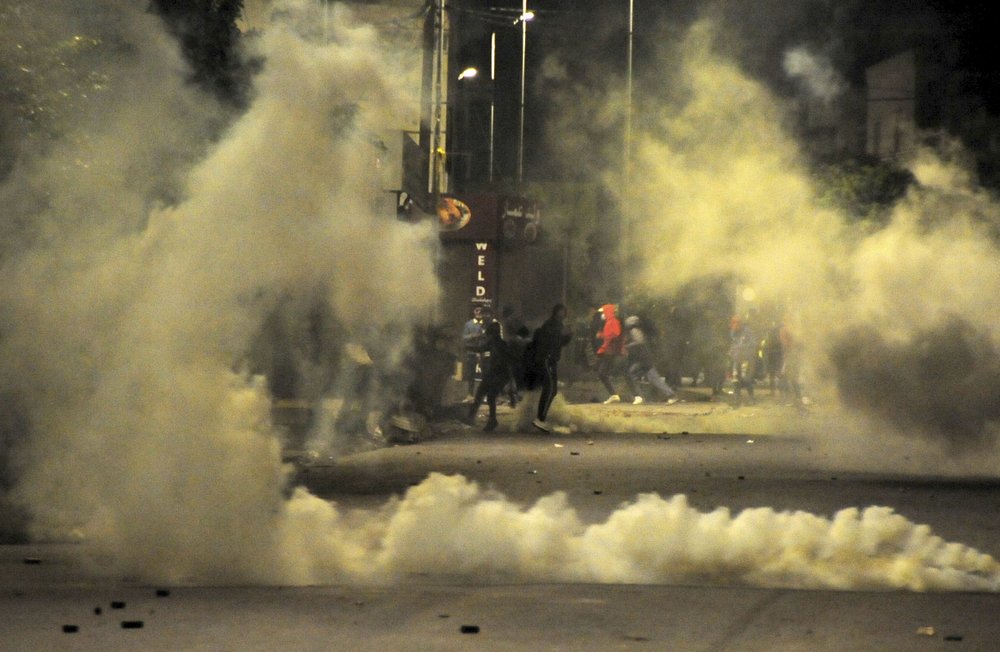 The youths of Tunisia have taken to the streets to protest in several capital cities, including the capital Tunis and Sidi Bouzid, the centre of the Arab Spring uprising, against economic hardship worsened by the pandemic.

They have had several clashes with the security forces as the protest enters the fifth day. President Kais Saied and Prime Minister Hichem Mechichi have called for restraint.

Earlier on Tuesday, protesters rallied in Tunis, reviving the chant that rang out a decade ago in a revolution that ushered in democracy: “The people want the fall of the regime,” Al Jazeera reports.

A third of the North African nation’s young people are unemployed, according to AP — and many are angry about their stagnant fortunes.

The protest in the country of 11.7 million people has led to a powerful response from the authorities, as fear of a repeat of the protests that led to the ousting of strongman President Zine al-Abidine Ben Ali 10 years ago hang heavy. The army has been deployed in four hot spots.

In Sidi Bouzid, witnesses told Reuters news agency that police had fired tear gas to disperse protesters who were raising slogans against politicians and demanding an end to decades of marginalisation.

Clashes also broke out in poor areas of Tunis, including el-Tadamen and Sijoumi, as hundreds of angry youths burned tyres and blocked roads.

The groups have been pelting municipal buildings with stones, throwing Molotov cocktails, looting, vandalizing and clashing with police. The unrest is concentrated in poor, densely populated districts where trust with law enforcement is already lacking, AP reports.

The army was introduced to the protest on Sunday night to quell tensions and protect the country’s institutions.

The police said many hundreds of protesters have been arrested.

Daytime protests in recent days demanding jobs, dignity and the release of detainees have been followed by nighttime violence, with COVID-19 restrictions compounding a wider economic malaise, Al Jazeera reports.

“The whole system must go … We will return to the streets and we will regain our rights and our dignity that a corrupt elite seized after the revolution,” said Maher Abid, a protester who is unemployed.

Protesters carry placards such as “Employment is a right, not a favor.”

Reports say they are angry over the broken promises of democratically elected President Kaïs Saied and his government, which hasn’t been able to turn around an economy on the verge of bankruptcy.

Prime Minister Mechichi said in a speech on national television on Tuesday that the government was listening to the demonstrators’ demands.

“I am aware that there are great anger and frustration in many areas, for the economic and social situation is in crisis and that has been deepened by the COVID crisis with its economic implications and measures it necessitated to preserve the health of Tunisians and that limited some personal freedoms such as the freedom of movement.”

“Your voice is heard and your anger is legitimate… Do not allow saboteurs among you,” he said, addressing protesters.

Protesters in all three rallies chanted “the people want the fall of the regime”, and called for more jobs.

On Tuesday, up to 250 people gathered on Bourguiba Avenue in central Tunis while other demonstrations took place in other locations.