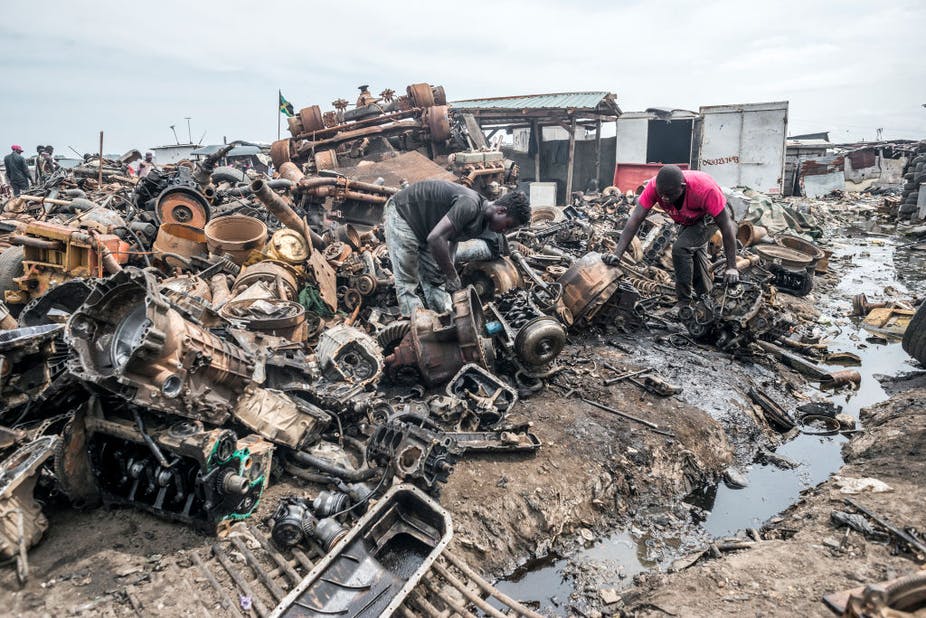 Toxic waste and electronic waste (e-waste) is generated from a wide range of industries – such as health, hydrocarbon or manufacturing – and can come in many forms, such as sludges or gas. E-waste is used electronic items that are nearing the end of their useful life, and are discarded or given to be recycled. If these types of waste aren’t properly discarded they can cause serious harm to human health and the environment.

This makes the proper disposal of toxic and e-waste expensive. Because of this a market has been created and some companies and independent waste brokers circumvent laws. They disguise toxic waste as unharmful and e-waste as reusable electronics. It is then exported to countries in West and Central Africa where it is often disposed of unethically at dump-sites.

In our recent paper, we show how Western companies and businesses (primarily those in Europe and the US) target countries in the Gulf of Guinea – we covered Nigeria, Ghana, and Côte d’Ivoire – as a dump for their toxic waste. This, despite the knowledge of the physiological and environmental effects of this waste.

These African countries do not have the facilities to enable the safe disposal of hazardous and toxic waste. And the true contents of the waste are almost always unknown to them. Exporters label unsalvageable electronic goods as reusable. This allows them to circumvent international laws which prohibit the transboundary transport of this waste.

Drawing on examples from Côte d’Ivoire, Nigeria and Ghana, our paper argues that toxic waste dumping in the Gulf of Guinea amounts to environmental racism. This is a term that’s used to describe a form of systemic racism – manifested through policies or practices – whereby communities of colour are disproportionately burdened with health hazards through policies and practices that force them to live in proximity to sources of toxic waste.

Other victims of environmental racism are Native Americans. In 2002 the US Commission for Racial Justice found that about half of this population live in areas with uncontrolled hazardous waste sites.

The dumping of toxic waste into Africa, while deliberately concealing its true content, shows that companies know it is ethically wrong. To protect communities within these countries, governments must implement the provisions of the Basel and Bamako Conventions. These conventions classify the transboundary movement of hazardous waste without the consent of the receiving state as illegal.

We also argue that the dumping of hazardous waste must be recognised by the United Nations and its member states as a violation of human rights.

We focused on three recent case studies of toxic waste dumping in Cote d’Ivoire, and e-waste dumping in Nigeria and Ghana to illustrate how specific acts of environmental racism happen.

We looked at waste dumping in Nigeria and Ghana because they are both identified by the United Nations Environmental Programme as among the world’s top destinations for e-waste. This includes discarded computers, television sets, mobile phones and microwave ovens.

In Nigeria, each month an estimated 500 container loads, each carrying about 500 000 pieces of used electronic devices (many of which can’t be used again), enter Nigeria’s port from Europe, the US and Asia. Similarly in Ghana, hundreds of thousands of tons of used electronics, mainly from Europe and the United States, are delivered in huge containers.

Because the electronics aren’t properly recycled, this waste has caused huge amounts of pollution to enter the environment. Communities in both countries are also exposed to toxic chemicals such as mercury and lead. Burning e-waste can increase the risk of respiratory and skin diseases, eye infections and cancer for those that work on and live close by.

This is in stark contrast to what happens in the origin countries of the waste. For example, in the United Kingdom electronic waste is required to be appropriately recycled  and is barred from incineration and landfills.

Misguidedly, the importation of e-waste to countries like Nigeria and Ghana continues because it generates much-needed revenue. For instance, Ghana is set to generate up to US$100 million each year from levies collected from importers of e-wastes. The informal sector is also a source of employment for many poor and vulnerable people. In Nigeria for example, up to 100,000 people work in the informal e-waste sector, processing half a million tonnes of discarded appliances each year.

Côte d’Ivoire serves as a good example to show the secrecy that is inherent in the toxic waste industry and the human and environmental cost of toxic waste dumping.

In 2006 Trafigura, a Netherlands-based multinational oil trading company, didn’t want to pay the EUR500,000 (about US$620,000) to treat and dispose of its toxic waste in the Netherlands. And so it approached an Ivorian contractor to dispose of over 500,000 litres of toxic waste. They paid the Ivorian subcontractor in Abidjan EUR18,500 (about US$22,000). The waste was disposed of at over 12 different locations around Abidjan. They claimed the material was non-toxic, hence no need for treatment.

The environmental racism is reflected in the fact that Trafigura knew that the waste was toxic and lied to discharge it in Côte d’Ivoire. Its decision is one of convenience and it is racist because it shows a disregard for African lives.

In the aftermath of the incident, over 100,000 people became sick and 15 people died. According to a 2018 assessment some of the sites are still contaminated.

The Ivorian government entered into a settlement agreement with the Trafigura Group, receiving CFA95 billion (approximately US$200 million). This was intended to compensate the state and the victims and to pay for clean-up of the waste. However, some victims haven’t received compensation. Subsequent bids by victims for compensation have been rejected by a court in Amsterdam.

We recommend that countries in the region implement the provisions of the Basel and Bamako conventions in their entirety. Doing this would ensure that the countries of origin would be active players, monitoring the brokers on their end and ensuring waste is stopped before it’s exported.

Currently, Nigeria and Ghana haven’t ratified the Bamako Convention; they must do so. Recipient countries must take the necessary steps to ensure that they’re not used as a dumping ground.

There’s also a need for an international tribunal on toxic waste dumping and related crimes – just like the International Criminal Tribunal for the Former Yugoslavia – to pass appropriate retributive justice. And though the Basel convention stipulates that the state can develop laws regarding liability and compensation for the victims, this has not yet resulted in fair compensation for victims.

Finally, it is imperative that Gulf of Guinea countries equip their seaports with technology and trained personnel that can detect hazardous waste.