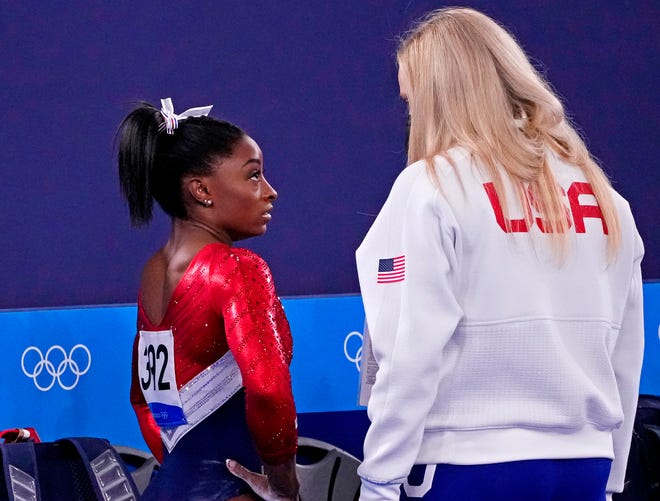 American Gymnast Simone Biles recently disclosed that the painful sexual abuse she suffered at the hands of her Doctor Larry Nassar is behind her mental issues. The psychological scare from the expirience forced her withdrawal from the women’s Olympic team gymnastics final Tuesday night, after executing just one vault

The US star’s bid for a record six gold medals at the Tokyo Games ended in shock fashion forcing the United States to surrender their title to Russia.

The entire event was turned on its head in an instant when Biles, the world and Olympic all-around champion, completely mistimed her opening vault to earn a low score of 13.766.

After her shocking withdrawal, with USA Gymnastics citing a “medical issue”, Biles would later confirm that she wasn’t injured but fighting some mental demons.

Her future at the Tokyo Games is now in doubt, admitting she is unsure whether she will compete on Thursday in the women’s all-around event.

“After the performance, I did I just didn’t want to go on,” said Biles, fighting back tears as she met with the media.

“We are going to see about Thursday. I’m just trying to gear up for the next test.”

USA Gymnastics said in a statement Biles had withdrawn because of a “medical issue”, and would be assessed daily.

“Injury, no,” she said. “Just a little injury to my pride.

“It’s just me in my head. I have to focus on my mental health and not jeopardize my health and wellbeing.

“We have to protect our body and our mind.

“Unfortunately, this has to happen at this stage … it just sucks when you’re fighting with your head.”

“Tonight they (her teammates) get a gold medal from me for fighting.”

Biles added: “Physically, I feel good, I’m in shape. Emotionally, that kind of varies on the time and moment.

“Coming here to the Olympics and being the head star isn’t an easy feat, so we’re just trying to take it one day at a time and we’ll see.”