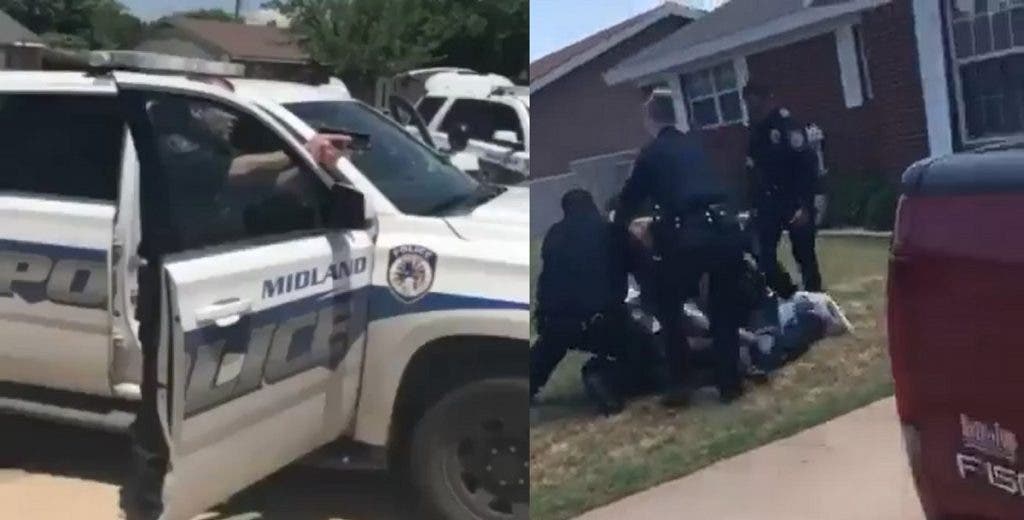 A 21-year-old black male could have seen his life snuffed out within seconds for failing to stop after he ran a stop sign in Texas.

Several police officers pulled their guns and repeatedly screamed, “Show me your hands” at the black male even though he was clearly already showing them in the video which is fast going viral on social media.

The video released by NewsWest 9 shows 21-year-old Tye Anders being confronted by police officers who had their guns drawn on him as he laid on the ground.

Anders can be heard frantically expressing to officers that he’s afraid that they are going to shoot him, and several witnesses, including family members, can be heard expressing the same concern.

Later, in the video, Anders’ 90-year-old grandmother walks towards Anders and then falls on top of him as officers move to handcuff him. All of this apparently started over Anders running a stop sign.

According to the Midland Police Department, officers attempted to pull Anders over after he drove through the stop sign. Instead of pulling over immediately, Anders continued driving until he got to his grandmother’s residence, at which point the officers, with their guns drawn, ordered Anderson to exit his car, which they said he initially refused to do.

“Upon exiting the vehicle, officers advised the subject to walk towards them to be detained, the subject then stopped and laid on the ground,” MPD said. Anders was arrested for evading police and has since been released from jail on bond.