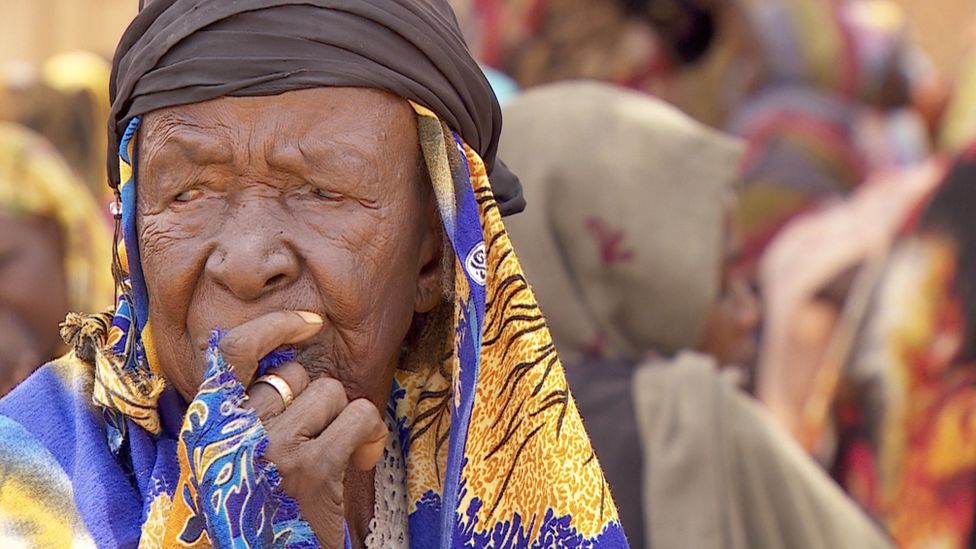 Two years after the Sudanese revolution, hundreds of thousands of people have been internally displaced as violence in Darfur continues. Many hoped a hard-earned peace agreement would put an end to the decades-old conflict, but the region’s bloody legacy continues.

Thirty-five-year-old Khamisa Juma Ishag Abaker is perched on a pile of rubble that was once her home.

Dressed in a floral print fabric that covers her from head to toe, she sifts through the dust to uncover an old bottle of perfume and dinnerware gifted to her but now broken – remnants of her old life.

“My house had a garden and a door. I could lie down in the shade. I could cook for my children.”

It’s her first time returning to Krinding – a settlement for displaced people – after clashes in January left tens of thousands of people homeless and hundreds dead.

“They burnt all the houses. We tried to flee into the street, but they shot my brother. He fell and when he tried to stand up, they shot him again – they killed him in front of me. I’ve cried so much… my eyes can barely see now.”

Now living in cramped conditions in a school classroom in El Geneina, the capital of West Darfur state, she is struggling to take care of her ailing parents and her children.

“We don’t have money. We don’t even have beds, pillows, or blankets… I don’t have anything. I just stare and do nothing.”

Ms Abaker says the Rapid Support Forces [RSF], a paramilitary group tasked by the government with keeping civilians safe, is behind the attacks.

She is too afraid to go back.

“If the international forces came, we could return, but they won’t.”

The absence of joint UN-African Union (Unamid) peacekeepers is being felt by many in West Darfur. After 13 years on the ground, experts say their gradual withdrawal since December has been met with a surge of violence.

Some 20,000 Sudanese troops were promised to take their place, but they are yet to arrive.

Darfur: How did we get here?

Bashir responded by arming local Arab militias – infamously known as the Janjaweed – who targeted non-Arab tribes accused of supporting the rebels. Hundreds of thousands of people died and many villages were burnt and pillaged.

Then in 2019, he was ousted from government by some of his own generals following mass street protests calling for his removal. Now in prison in Sudan serving a sentence for corruption, Bashir is due to be transferred to the International Criminal Court (ICC) to face genocide and war crimes charges, which he denies.

A year after the revolution the new military-civilian transitional government signed a peace agreement with local rebel groups. Residents believed it was the beginning of a new era of calm, but unrelenting violence, which began in December 2019, has continued to grip the region.

As a result, more than 150,000 people have been displaced, according to data from the International Organization for Migration.

El Geneina is overflowing with people left twice displaced. Some 80 government sites host at least 50,000 civilians – all now experts in building makeshift homes assembled together from plastic sheets and sticks.

As people shift from the peripheries of town into temporary urban camps, so too has the conflict.

In April, fighting between one of Darfur’s biggest communities, the Masalit, and the Arabs spread to the centre, leaving people terrified of a future attack.

Khamis Mohamed Ishag Osman – a victim of the April clashes – was shot while fleeing for safety from El Geneina’s El Jebel settlement.

With a look of anguish across his face, he points to the bullet wound protruding from his left shoulder.

“The attack was massive. My mother and I held the kids and ran. They shot me whilst I was holding my kid in my arms and running.”

He took shelter in a temporary camp in town, but found living there unbearable.

“I needed basic things for my kids… If you needed the bathroom you would have to walk for two or three hours with over a thousand people queuing.

“The children wanted to wash themselves and use the bathroom, but they didn’t feel comfortable.”

After the attack, the Sudanese government installed checkpoints in some areas to ensure security and to encourage people to return to settlements.

It’s been a month since Mr Osman returned to El Jebel – now a dusty, desolate settlement devastated by conflict.

He and his family spend the mornings rebuilding his destroyed home – using natural resources to salvage what’s left of it. The tree that once shielded his family from the oppressive Sudanese sun has now been chopped down for the foundations of his house.

Many more people who spoke to the BBC also don’t feel safe. They say the government, including the RSF, which grew out of the Janjaweed, are untrustworthy.

One of the prerequisites to peace was a full integration of the RSF into the military. However, its commander, Mohamed Hamdan “Hemeti” Dagolo – who is also the country’s vice-president, has since publicly refused to unify with the Sudanese armed forces.

Experts believe this is slowing down the peace process, affecting Darfuris tormented by the violence of the past and present.

Humanitarian organisations working on the ground have also emphasised the government’s need to work harder to ensure security.

Elliot Vhurumuku, from the UN’s World Food Programme – which is providing life-saving nutrition to more than a million people in the region – says every attack heightens food insecurity.

“All our operations are affected [during clashes] and normally for two weeks or even more, we cannot move any commodities from our warehouses to the population in El Geneina and the population outside it.”

With no end in sight for the violence that has engulfed West Darfur, the peace process is beginning to show signs of cracks.

That’s why Ms Abaker is not optimistic about the future.

“The conflict will not end soon,” she says. “It will erupt again and again.”