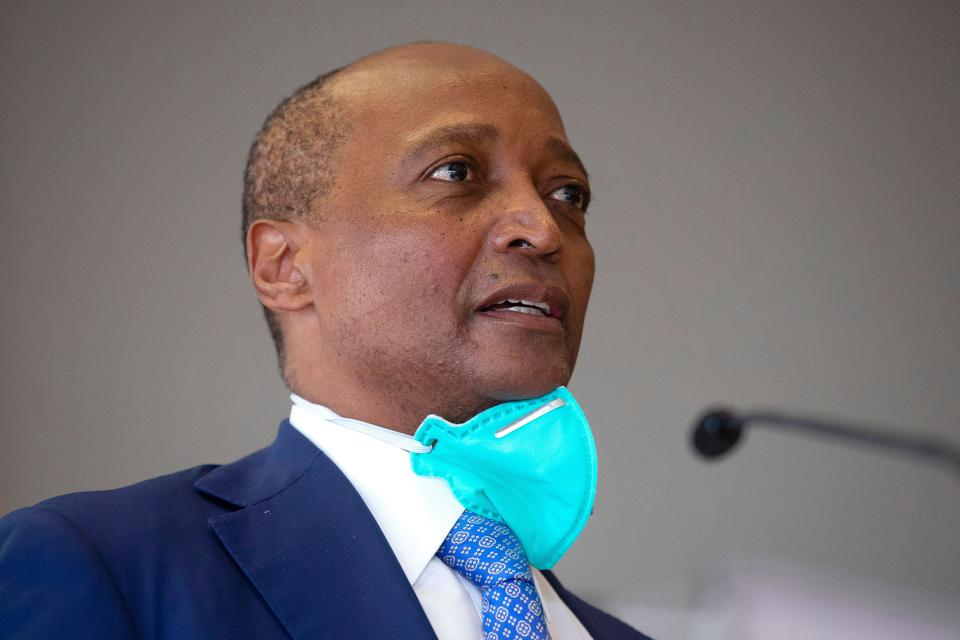 South Africa: Billionaire Patrice Motsepe Sets Out His Strategy Ahead Of The CAF Election

“What am I going to do in football?”, Patrice Motsepe wondered aloud.

On 25 February at the Sandton Convention Centre in Johannesburg, the businessman posed the question that so many people have been asking ever since he announced his candidacy to become president of the Confederation of African Football (CAF) on 9 November 2020.

“I was asked three, four times: ‘will you stand for CAF?’”, Motsepe said. “But I can’t tell you what I said because there are children in the room,” added Motsepe. Carefully controlling his language, the billionaire confides: “I answered no, certainly not, I have enough challenges in my life.”

He has not explained why he changed his mind and decided to run after all. Responding to questions from journalists, the 59-year-old entrepreneur continued to say that he has enough work, that his number one priority is his foundation, that football has cost him more money than anyone else on the continent and that there are other very competent people that can lead African football organisations.

However, his last response hints at the reason for his change of mind: “I love football. It is a stupid, irresponsible love.”

There are, however, no unreasonable proposals in Motsepe’s programme, which is based around 10 objectives. These include introducing video assistant referees, better TV broadcasting of African matches and building at least one stadium according to FIFA standards in each country.

He has stated that he would prefer to hold the Africa Cup of Nations (CAN) every two years, has pledged not to move the CAF headquarters from Cairo to Johannesburg, and has denounced the rumours that he intends to “harm Morocco”. Motsepe insists on being seen as a unifying candidate who values fair play, even asking the room to applaud his opponents. “It doesn’t matter who wins,” he says.

Is this the kind of humility he demonstrates in his business dealings? As he himself reminded the audience, Motsepe does business in 40 countries on the continent.

An overly aggressive bid could turn economic partners into adversaries. The investor, after all, has an empire to protect. After making his fortune in mining in the 1990s, he is diversifying his activities through his private-equity firm African Rainbow Capital. With an estimated fortune of $3.2bn, Motsepe is among the top 10 richest people on the continent.

According to Zimbabwean Phillip Chiyangwa, chairman of the Council of Southern African Football Associations (Cosafa), this extreme wealth could be an asset. “Before, people were looking for a good place to gorge themselves. Now it’s different.”

Remote control in hand, Motsepe went through his slideshow. He shows a photo taken with former US president Barack Obama and talked about the time he met football legend Didier Drogba.

There was nothing, on the other hand, about his relationship with South Africa’s President Cyril Ramaphosa, his brother-in-law. The head of state did not get publicly involved in this candidacy bid.

Only Nathi Mthethwa, South Africa’s minister of sports, made the trip. Also present in the room were Amaju Pinnick, president of the Nigerian football federation and Moïse Katumbi. Like him, his “friend Moses” is a businessman and boss of one of the most prestigious African clubs, TP Mazembe.

It is also thanks to the reputation of his team, Mamelodi Sundowns FC, that Motsepe can even consider running for president of the CAF. The Pretoria club won the continental championship in 2016.

If he is elected president, Motsepe will withdraw from Mamelodi Sundowns in order to devote himself body and soul to his new position. The first year of his presidency would be devoted to visiting all the presidents of federations on the continent to ask them what their priorities are.

In all honesty, Motsepe already knows the answer. The most urgent thing is money. This explains the reason for who he intends to meet with, should he win the election. “His name is Patrick. He’s a friend, we know each other, we’re part of the World Economic Forum,” says Motsepe. By “Patrick” he means Patrick Pouyanné, CEO of the oil group Total, one of CAF’s main partners since 2016.

As a good miner, Motsepe knows where to dig for money. “You have to talk nicely to the CEOs, persuade them. You have to tell them ‘you’ll make billions, plus it will be good for your business!’” Under his presidency, he intends to make African football profitable and “the best in the world”.

As a good miner, Motsepe knows where to dig for money. “You have to talk nicely to the CEOs, persuade them. You have to tell them ‘you’ll make billions, plus it will be good for your business!’” Under his presidency, he intends to make African football profitable and “the best in the world”.