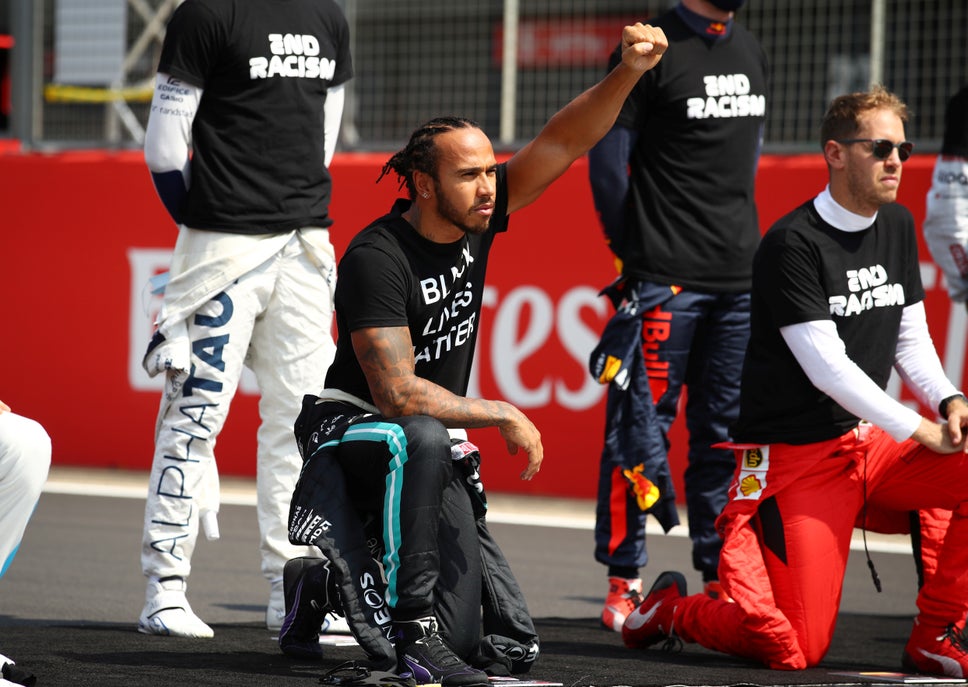 At the turn of the year, the knighthood bestowed on Formula 1’s best motor-racing driver, who now becomes Sir Lewis Hamilton, in the UK Queen’s New Year’s Honours list, thankfully took the press and media headlines away from the story of the worst pandemic for more than a generation and the sad denouement of the Brexit saga.

It was that startling, and was welcomed by many who, otherwise, have little more than a nodding acquaintance with the recipient’s sport. Here, in fact, was a man whose personal charisma, jet-set lifestyle and professional achievements have matched the glamour of the circuit.

Because of the speeds involved, the risks and personal courage demanded, the very high-level  technical expertise required, its unique international dimension and its ability to attract celebrities and the ‘beautiful people’, grand prix racing has the rare capacity to create heroes and attract global attention.

Hamilton isn’t merely a hero: he is one of those few sportsmen in history – Muhammad Ali was another – who transcend their sport. Even so his fame away from the track owes everything to his exceptional record on it.

The boy who was born 36 years ago to a Grenadian father, Anthony, and English mother, Carmen, in modest circumstances in provincial Stevenage, Hertfordshire has become the master of a sport usually dominated by the extremely affluent and those raised in motor-racing families or circles.

His achievement speaks for itself. In this past season Lewis has equalled the record for the most World Championships (7) and established a new record for the most career wins (95) – in the first case joining, and in the latter surpassing, the hitherto incomparable Michael Schumacher, the German who remains a legend of the sport.

Is Hamilton ‘the greatest’ Formula 1 driver ever? Don’t take my word for it. Toto Wolff, boss of Mercedes, the team for which he drives, confirmed: “Lewis is one of the greatest racing drivers of all time and the most successful British sportsperson of his era … This year he combined excellence on the track with a powerful voice against discrimination. In every sense he led the way.”

Former driver John Watson had noted that Lewis “is by a million miles, the greatest driver of his generation and you can argue he will go on to be the greatest Formula 1 driver of all time”.

It doesn’t stop there. Bernie Ecclestone, the most powerful man in the sport, has expressed his appreciation of Hamilton’s ability to promote the sport through his lifestyle and willingness to engage with fans.

Unlike most drivers, who seek anonymity away from competition, Lewis displays a distinctive appearance through his earrings, dreadlocks and designer clothing, as well as his espousal of issues and his care for the world and its people.

Lewis makes sure that the attention and influence which come naturally to him, as the only Black Formula 1 driver – let alone champion – to date, is used positively. The obvious genuineness of his stance has replaced some initial suspicion with real respect worldwide.

The racial insults which Hamilton suffered from his earliest days at school and in his child racing club followed him into Formula 1. According to Toto Wolff he was “scarred for life” by the abuse inflicted in his childhood.

Although he tried to ignore the racist taunts early in his career, Lewis has grown sufficiently confident to counter the menace by recognising that he is in the position to influence the lives of others by his experience.

He is impressed that people from different backgrounds tell him “my kid wants to be like you”. In his quest for diversity Hamilton has openly challenged attitudes that are inherent in Formula 1. He took the knee before every race he entered last season and wore t-shirts bearing the Black Lives Matter slogan.

His challenge – “The way minorities are treated has to change, how you educate those in your country of equality, racism and classism and that we are all the same. We are not born with racism in our hearts, it is taught by those we look up to” – brought a strong response.

Ross Brawn, managing director for Formula 1, who described Hamilton as being a great ambassador for the sport, said those words were “very valid”.

Although he acknowledged that wearing a t-shirt in support of Breonna Taylor, the young lady shot fatally by American police, while he was on the podium contravened accepted official team attire, Lewis admitted that he “didn’t regret a single moment of it”.

Damon Hill, world champion in 1996, told Sky News: “Lewis has stood up for issues that are close to his heart and affect everyone. In our sport it is very rare for a driver to get involved in anything outside of Formula 1.

Last year alone Hamilton, when Time magazine rated him one of the hundred most influential people internationally, launched several cultural and commercial initiatives.

He pledged half a million US dollars towards fire services and animal welfare charities affected by the Australian bushfires, established the Hamilton Commission with the Royal Academy of Engineering, and took up with the Bahrain government the case of a man facing the death penalty whose 11-year-old son had written to him.

These activities, and many more, in addition to his ‘day job’ on the track, won Hamilton the recommendation to be knighted on the Diplomatic and Overseas List. He has lived overseas since 2007 and is presently resident in Monaco. Even so, the HMRC’s UK Income Tax Liabilities Statistics show him to be among the 5,000 highest tax payers in the UK.

Let us leave the summing-up to Bernie Ecclestone. “As a driver he is absolutely outstanding – as good as there’s ever been. Apart from the talent, he’s a good guy. He gets out on the street and supports and promotes Formula 1. He is box office, 100 per cent.”

And to David Richards, Chairman of Motorsport UK: “He recognises he is a role model and the influence he has and the responsibilities that come with it. He is far broader than purely a driver. He has opinions about the environment, young people, fashion and music. That is part of the greater appeal of Lewis today”.