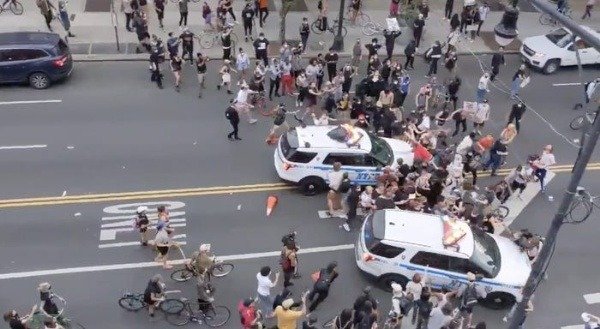 A video showing the moment two New York City Police Department cruisers rammed through a crowd during Saturday’s protests over the death of George Floyd has surfaced.

In the 27-second video being circulated, a crowd of protesters could be seen throwing what appeared to be water bottles at a NYPD cruiser.

Then a second police cruiser can be seen driving up along the first car before both cars suddenly rammed into a barricade, knocking over and sending protesters scattering.

Screaming and yelling could be heard over top of the police sirens. Angry protesters can also seen jumping on top of the trucks. It’s unclear if there were any injuries

The incident further fuels the flames of negative interactions between police and the people they’re sworn to protect.

Mayor of New York City Bill de Blasio said the incident is under investigation. But he emphasized that the police officers may have had no other choice.

“I’m not going to blame officers who were trying to deal with an absolutely impossible situation. The folks who were converging on that police car did the wrong thing to begin with, and they created an untenable situation,”

“I wish the officers had found a different approach, but let’s begin at the beginning. The protesters in that video did the wrong thing to surround that police car, period.”

A lot of the protests keeps erupting in major cities across the US after the death of George Floyd at the hands of police in Minneapolis.