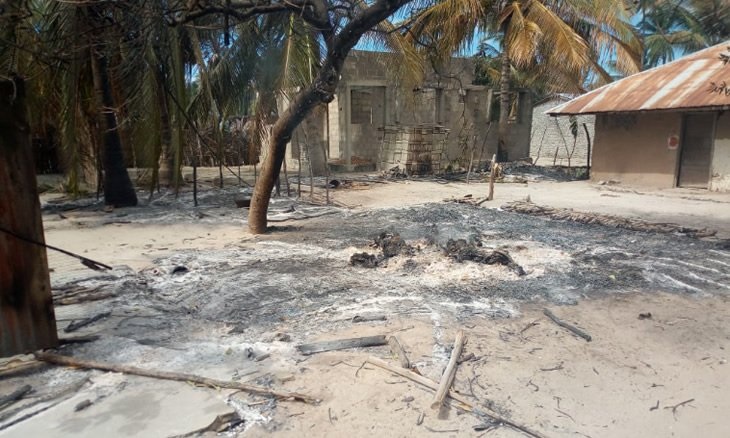 An ancient, gruesome repeat of a cancerous history that has plagued the entire African continent, from north to south hitting all corners of the interior. The cold clandestine calculated mass extermination of innocent country-side dwelling defenceless Blacks by shadowy feral Islamists groups using religion as front and license, with the ulterior motive to creating horrendous chaos, stealing lands and whatever resources therein

As in Mali, Sudan and Nigeria, this time the diabolic dark clouds gather steadily in Mozambique with no justice nor remedy in sight.

The attackers lured the victims from their homes in the dead of night by shouting “thief”, gunning down those who ventured out to intervene, decapitating them and setting one of their heads ablaze.

Survivors of the attack that struck a normally quiet corner of north Mozambique described the panic after 20 men armed with guns, machetes and knives stormed Naunde village.

Two young men who responded to the disturbance were captured and killed, said Mauricio Miranda, a village leader who survived the assault.

“They severed his head, stuck it on a log, roasted it with the fire from a burning car and they left it at the market,” said a witness, Narciso Cassimo, shaking with rage as he described the carnage, standing in front of a burnt-out shell that was once a house.

Atanasio Nacir, the headteacher of the local primary school, and his deputy, Issufo Amade, raced towards the villagers who had come under attack as they slept.

“They burned the first car,” Nacir told AFP on Thursday.

“We stopped and started watching. They burned another house. And that is when a lady screamed at us that ‘you’d better get out because they are targeting men’,” he said.

‘Sound of a gunshot’

Amade said that he saw three white men among the attackers after being woken by the screams of a neighbour whose husband had just been killed.

“We went outside to try to find that lady… and then we heard the sound of a gunshot,” said Amade.

“The three men I saw were white and strong. They were carrying large backpacks. They started burning houses, went into my house, took the clothes, told my family to leave, and burned down the bathroom.”

The group, which conducted its first attack in October and is said by academics to want to impose sharia law in the region, has not published claims of responsibility or any demands.

Naunde villagers attempted to repel the attackers with whatever weapons they could find but were struck down by gunfire.

“We had machetes and arrows. We tried to react and they began to shoot us. So we had to run away,” said Miranda, a village elder.

Mounds of debris, charred wood and scattered possessions are all that remains of many of the homes and businesses that once speckled the white sandy ground.