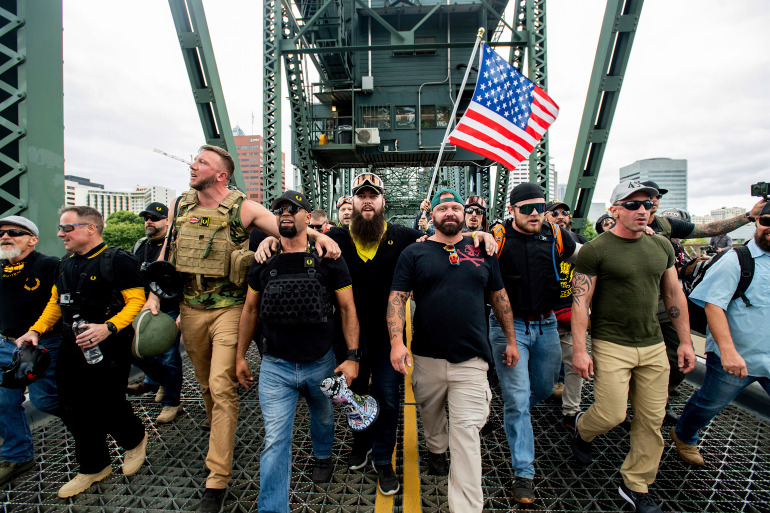 Canada has beat the U.S. to designate the far-right white males only group, Proud Boys, as a terrorist entity.

Public Safety Minister Bill Blair said the decision was influenced by the group’s “pivotal role” in the 6 January riots at the Capitol in Washington, DC.

Under Canada’s Anti-Terrorism Act, any property or belongings associated with the group can be seized, and they can also be charged with terrorist offences if they commit violent crimes.

“The group and its members have openly encouraged, planned, and conducted violent activities against those they perceive to be opposed to their ideology and political beliefs,” reads a statement by Public Safety Canada.

The neo-fascist group is anti-immigrant, and has a history of violent political confrontations.

It was founded in 2016 by Gavin McInnes, the Canadian co-founder of Vice Media. Vice has since worked to distance itself from Mr McInnes and the Proud Boys.

During a September presidential debate, Donald Trump had urged the Proud Boys to “stand back and stand by” when asked to condemn them by a moderator.

The birth of the Proud Boys was occasioned by Trump’s presidential campaign era prior to the 2016 race.

As Trump’s rhetoric continued post-election and into his presidency, the group’s profile heightened domestically and throughout Canada, as well as the rise of hate crimes, NewsOne reports.

Proud Boys members are notorious for organizing and participating in inflamatory white supremacist gatherings over the last four years, including the deadly 2017 Unite The Rite Rally in Charlottesville, Virginia.

The Southern Poverty Law Center (SPLC), an organization dedicated to studying and surveying hate groups in America, declared the Proud Boys a hate group in 2018.

“There is no basis for it. It’s infringement of free speech rights. All the Canadian Proud Boys have ever done is go to rallies,” Tarrio said in a phone interview.

“They used what happened at the Capitol to push for this.”

Tarrio said the Canadian chapters are very quiet compared to their American counterparts. He estimated there are between 1,000 and 1,500 Proud Boys in Canada.

Ironically, Tarrio was arrested in Washington shortly before the Capitol riot. He was accused of vandalizing a Black Lives Matter banner at a historic Black church during an earlier protest in the nation’s capital.

Asked whether the U.S. will follow Canada and designate Proud Boys as a terrorist entity, White House press secretary Jen Psaki said the U.S. has a domestic extremism review underway. “We will wait for that review to conclude before we make any determinations,” Psaki said.