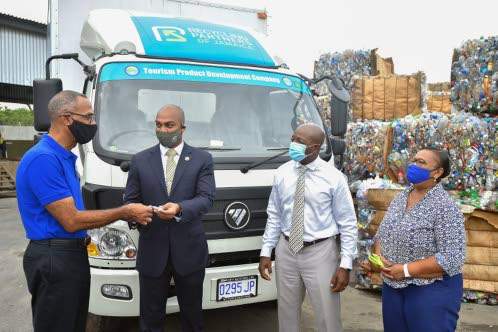 In an effort to protect the environment and preserve Jamaica’s tourism product, the Ministry of Tourism through its agency, the Tourism Product Development Company (TPDCo), has donated a well-needed box truck to the Recycling Partners of Jamaica (RPJ). The truck will allow for more efficient collection of plastic items and other pollutants in the resort town of Negril.

Funding for the truck was provided under a Memorandum of Understanding, between TPDCo and its sister agency, the Tourism Enhancement Fund (TEF), at a cost of approximately seven million dollars.

Speaking on behalf of the Minister of Tourism, Edmund Bartlett, at the official handing over of the truck yesterday (October 21), Acting Executive Director of TPDCo, Stephen Edwards said: “This worthwhile venture between the Recycling Partners of Jamaica (RPJ) and the tourism sector is a necessary move towards a better future, which includes a more diverse and responsive tourism sector.”

“We have adopted many strategies that are geared towards the preservation of our tourism product. The procurement of this box truck is one such way in which we are assisting in mitigating the impact of pollution and the destruction of the environment,” he added.

Minister of Housing, Urban Renewal, Environment and Climate Change, Pearnel Charles, Jr.,  shared Minister Bartlett’s sentiments and added that the government of Jamaica remains committed to promoting and fostering environmental protection island-wide. “We are inviting Jamaicans to join in the journey towards action, climate resilient houses, urban renewal initiatives, environmental protection … this is the Jamaica we want. This is the Jamaica we deserve,” he said.

Also present at the handing over ceremony at their Lakes Pen Depot was the Chairman of the Recycling Partners of Jamaica, Dr. Damien King. He expressed appreciation for the donation and noted that environmental awareness has been rising locally, which is reflected in the recent bans by the Government of single-use plastic and Styrofoam items. He revealed that plans are being finalized to target plastic bottles.

“The country is going to continue along those lines, and the next step in that journey is plastic bottles.  We are going to do so in a public-private partnership — the likes of which, we may not have seen before —between the government and the manufacturers of the products which are distributed in plastic bottles,” said Dr. King.

According to Dr. King, this partnership will organize a scheme to get the vast majority of the 800 million bottles that are distributed each year, to be recollected for recycling.  He said a campaign for this initiative will be launched in the coming months.