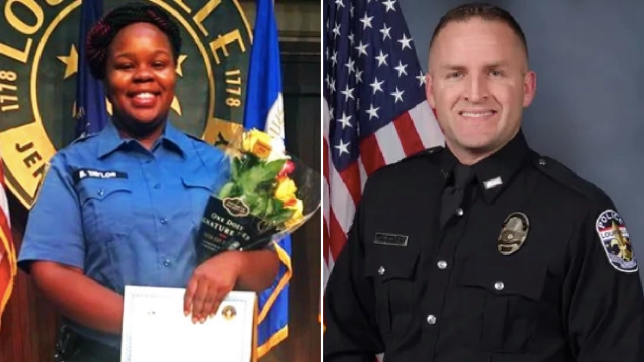 A white police officer, Brett Hankinson who invaded the home of a black woman, Breonna Taylor, 26, and fired 10 rounds into her home killing her in the process has been sacked.

Brett Hankinson was sacked from his job as an officer with the Louisville Metro Police Tuesday after his boss said he’d shown ‘extreme indifference to the value of human life’ and violated the PD’s rules on using deadly force.

Metro UK reported that the termination letter, signed by Louisville Police Chief Robert Schroeder, said Hankinson had behaved ‘wantonly and blindly’ after firing 10 rounds into Taylor’s home. Schroeder added: ‘I find your conduct a shock to the conscience. Your actions have brought discredit upon yourself and your department.’ Taylor – an emergency medical technician – died in her hallway after being shot eight times. Her violent death helped trigger ongoing Black Lives Matter protests across the United States. Supporters welcomed Hankinson’s firing, and said he should now face criminal charges over Taylor’s death. The Taylor family’s attorney Sam Aguilar called Hankinson a cop who ‘plagued our streets and made this city worse for over a dozen years.’

Commenting on his firing, Aguilar added: ‘It’s about damn time. Let’s hope that this is a start to some good, strong criminal proceedings against Officer Hankinson, because he definitely deserves to at least be charged.’ Taylor was shot eight times by officers who burst into her Louisville home using a no-knock warrant during a March 13 narcotics investigation. The warrant to search her home was in connection with her boyfriend Kenneth Walker.

Hankinson and his colleagues returned Walker’s fire, but Schroeder said that the cop had fired those 10 rounds without first establishing the threat he had faced, and whether anyone innocent was also at risk of being injured. The no-knock search warrant that allows police to enter without first announcing their presence was recently banned by Louisville’s Metro Council. The letter that dismissed Hankinson also told how he fired the rounds ‘without supporting facts’ that the deadly force was directed at a person posing an immediate threat. Two other cops who attended Taylor’s home on the night of her killing have been reassigned to administrative work while the investigation into her death continues.