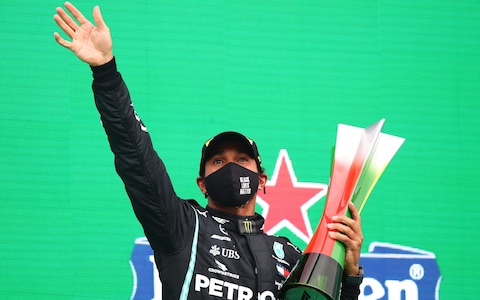 It was a history-making event in the Portuguese Grand Prix, as Lewis Hamilton blazed the tracks in his Mercedes and came out top of the pack, breaking Michael Schumacher’s all-time record of 91 wins. Hamilton’s Portuguese GP win sets him apart as the greatest driver of all time with a record-breaking 92 wins. The Black driver from Stevenage, United Kingdom has rewritten Formula 1’s history books.

Lewis Hamilton has always been racially isolated in F1, being the only Black driver to compete in the sport. He has repeatedly called for racial diversity in the industry, giving room for more drivers of Afro-descent to compete.

According to Wheels24, Hamilton started his career in 2007 and finished on the podium for the McLaren-Mercedes team on his first outing at the season-opening race in Australia. Several races later and he would win his first race at the Canadian Grand Prix – the first in what would become a record-breaking run. Hamilton is also the first driver in the sport’s history to have won a race in every season he competed in, taking at least one victory.

The top 5 drivers in F1’s history

Behind Lewis Hamilton is Michael Schumacher, who set an almost impossible record of 91 wins throughout his career between 1991 – 2006. Schumacher is widely regarded as one of the best drivers to have participated in F1.

Immediately behind Schumacher is Sebastian Vettel – who has won a total of 53 races, most of which came between 2010 and 2013 when driving for Red Bull.

The remaining two drivers on the top 5 list are Alain Prost and Ayrton Senna, who’ve won 51 and 41 races, respectively.

At the rate Hamilton is going, he may surpass 100 wins and set a scary record to break.

However, until someone supplants him, the history books will always remember Lewis Hamilton as the most successful Formula 1 driver in history in terms of race wins.