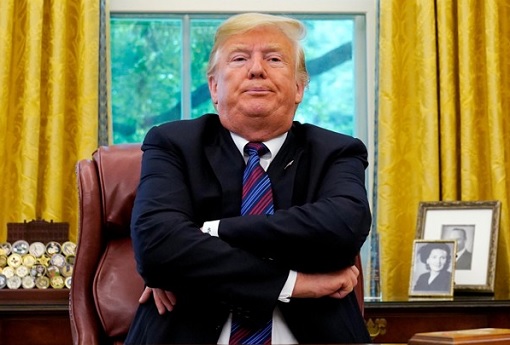 ‘No, I Don’t Feel That At All’: Trump Says He Doesn’t Feel Responsibility To Understand Black Americans ‘Anger And Pain’!

Donald Trump couldn’t care less about the plight of Black people in America in the face of systemic racism, as he said he doesn’t feel a responsibility “at all” to try to have a better understanding of the pain Black Americans feel, according to a new book by Pulitzer Prize-winning journalist Bob Woodward.

Reports have it that his comment came during an interview he had with Woodward on June 19, just weeks after the police killing of George Floyd, an unarmed Black man whose death at the hands of Minneapolis police in late May sparked months of widespread protests against police brutality and systemic racism.

The discussion constitutes one of nearly 20 interviews between Woodward and Trump that are referenced in the journalist’s book “Rage.”

The Washington Post reported that during one interview with Trump on June 19, Woodward asked the president about the role white privilege has played not only in his life but especially in his presidency.

“…And do you have any sense that that privilege has isolated and put you in a cave, to a certain extent, as it put me – and I think lots of White, privileged people – in a cave and that we have to work our way out of it to understand the anger and the pain, particularly, Black people feel in this country? Do you see?” Woodward asked.

Trump literally scoffed at the notion.

“No,” Trump responded in a vocal tone that suggested he couldn’t believe he was even being asked the question. “You, you really drank the Kool-Aid, didn’t you? Just listen to you, wow. No, I don’t feel that at all.”

Trump went on to downplay “systematic or institutional racism in this country” by saying it was “less here than many places.”

Woodward presses Trump further about the topic, but, in response, Trump reportedly refers to how well the economy has fared for Black Americans under his administration. He also reportedly reiterated his long-repeated claim of doing more for the Black community than almost any president in history.

He reportedly talked with Woodward regarding race again roughly two weeks later. However, during that call, Trump spoke about not receiving enough support from the Black community.

“I’ve done a tremendous amount for the Black community. And, honestly, I’m not feeling any love,” he reportedly said during the conversation.

Trump has made efforts in recent months to win more support from African American voters ahead of the coming election, however, according to prevailing statistics, Democrats candidate Joe Biden has enjoyed much more support from the voting bloc thus far.

Donald Trump sees himself as being non-racists and has repeatedly pushed that narrative, however, some of his actions have betrayed his anti-racist claims. He has faced criticism in the past for the years he spent promoting the false “birther” conspiracy theory targeting former President Obama.

Trump had also publicly shamed four Democratic congresswomen of colour, telling them to “go back” to their countries, despite all of them being U.S. citizens. Also, he reportedly referred to African nations as “shithole countries” two years ago.

Woodward also released excerpts of his interview with Trump surrounding the threat the Wuhan virus posed to the U.S. The interview featured the president saying in his own words how severe of a public health threat the COVID-19 was.

That interview, in particular, took place before Trump repeatedly described the coronavirus to the American people as a political “hoax” being pushed by Democrats during an election year. The end result has been more than 190,000 deaths of Americans, including notable individuals like Herman Cain who refused to wear personal protective equipment like masks because he believed and repeated Trump’s claims downplaying the Wuhan virus’ true threat.

Trump later on Wednesday admitted he downplayed the threat — only after the audiotapes were released — and said he didn’t want people to panic if they knew the truth.