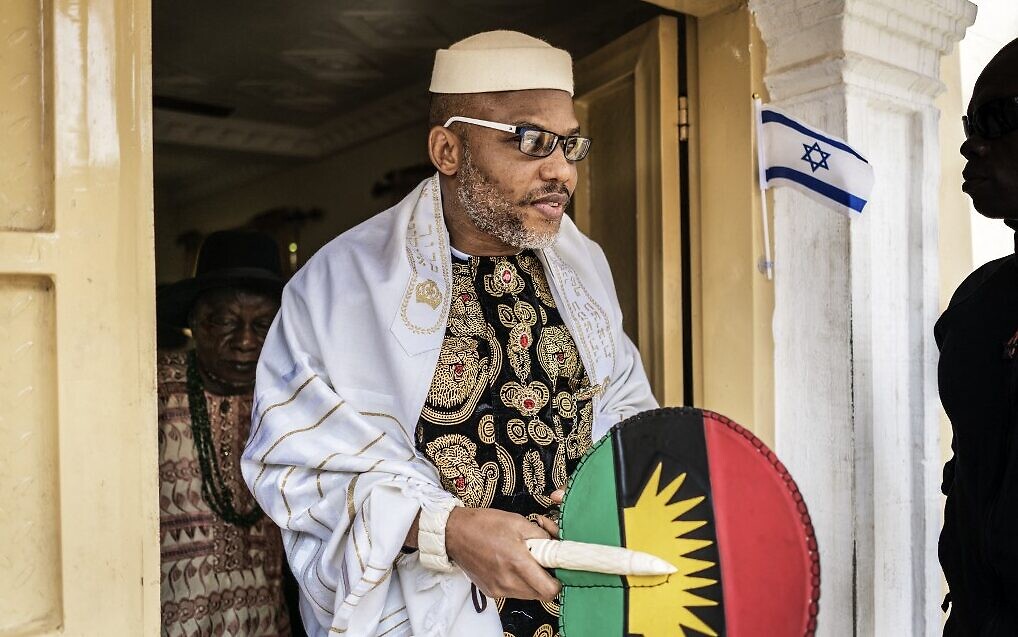 The UK government has approached Nigeria for clarification on circumstances under which the Nigerian government extradited Nnamdi Kanu, the secessionist leader who holds dual nationality of both countries.

Mr Kanu, labelled a fugitive by the Nigerian government, is the leader of the proscribed organisation Indigenous People of Biafra (IPOB), a movement in the southeast region Nigeria clamourig for secession from Nigeria.

Kanu was brought to Court in Nigeria on Wednesday after officials claimed they had arrested him in London, UK.

However, the British government has denied that the 53-year-old Kanu was arrested or extradited from the UK.

The Head of Communications of the British High Commission in Nigeria, Mr Dean Hurlock, said on Wednesday that the UK will seek clarification from Nigeria on the circumstances surrounding Kanu’s arrest and extradition.

“We can reaffirm that Nnamdi Kanu was not arrested in the UK nor was he extradited from the UK.

“With regards to any questions about the possible legality of his arrest, the British High Commission in Abuja is currently in the process of seeking clarification from the Nigerian government about the circumstances of the arrest.”

The agitation for Biafra and scession from Nigeria started in 1967 after the brutal massacre of Igbos in the northern pogrom which led the late Biafra leader Major-General Emeka Ojukwu to declare the Rupublic of Biafra.

The declaration precipitated a civil war in which an estimated three million people died in what has been described as a genocide in eastern Nigeria.

Read: Nigeria, The Biafra Struggle: All You Need To Know About Arrest Of IPOB Leader Mazi Nnamdi Kanu

Kanu, who fled to London in 2017 after jumping bail while standing trial for treason and was re-arrested and brought back to Nigeria on June 26, 2021 and arraigned before the Federal High Court in Abuja on June 29, 2021.

The British Government said its Foreign, Commonwealth and Development Office was ready to provide consular assistance to Kanu as it expected the trial of the Biafran separatist to follow due process.

His lawyer, Ifeanyi Ejiofor, has formally applied to the usually secretive police squad, Department of State Service (DSS), to allow them access to their client.

Justice Binta Nyako of the Federal High Court, Abuja, on June 29 ordered that Kanu be remanded in the custody of the Department of State Services until July 26 when the case would he heard.

Kanu’s younger brother, Mr. Kingsley Kanu, on Wednesday night claimed that his brother was arrested in Kenya. This is coming amidst speculations that Kanu was arrested in UK, Ethiopia, and Brazil.

“My brother has been subject to extraordinary rendition by Kenya and Nigeria. They have violated the most basic principles of the rule of law.

“Extraordinary rendition is one of the most serious crimes states can commit. Both Nigeria and Kenya must be held to account. I demand justice for my brother, Nnamdi Kanu.

“The British High Commission in Nigeria must insist upon my brother’s immediate release. They must guarantee his safety and security.

“Nnamdi Kanu must be returned home to the UK to his wife and his sons who live here. The Foreign Secretary, Dominic Raab, must make clear to the Nigerian authorities that they will not tolerate the unlawful detention of British citizens and that the UK Government condemns the Nigerians and Kenyans for undermining the rule of law.

“Foreign Secretary, Raab, must be clear. There will be consequences for those who resort to extraordinary rendition. The British Government must insist upon justice for Nnamdi Kanu,” he said.

According to the East African, Kenya’s High Commission in Abuja did not immediately comment but an official at the Foreign Affairs Ministry in Nairobi said the government will check whether he travelled to Kenya using different passport and names.

A spokesperson from the British High Commission in Nairobi too said the government was seeking information from Nigeria.

“We are seeking clarification about the circumstances of the arrest from the Nigerian government,” the spokesperson told The EastAfrican.

Kanu’s arrest bears a striking resemblance to that of high profile politician, the late Umaru Dikko.

In 1984, Mr Dikko was abducted in London and put in a crate for repatriation to Nigeria before an intelligence report prompted British police to detect the crate at the luggage compartment in a Nigerian Airways plane in Heathrow airport.

Dikko was Minister of Transport in the Second Republic and had fled to the UK when then Gen Muhammadu Buhari overthrew civilian President Shehu Shagari. Buhari then assumed power as military dictator.

The event strained ties between Nigeria and the UK for years.