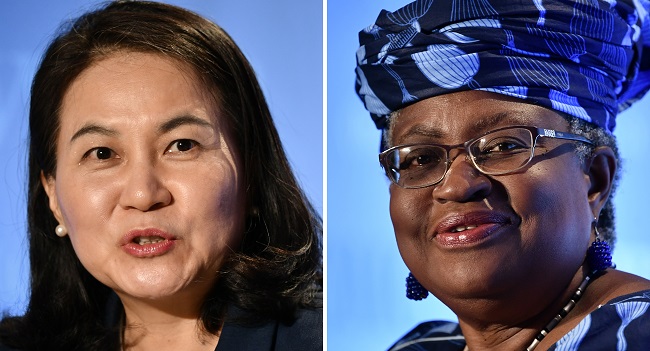 Dr. Ngozi Okonjo-Iweala, Nigeria’s candidate for the position of the Director-General of the World Trade Organisation (WTO) job, has been selected as one of the two female candidates to proceed to the final stage in the race to lead the Geneva-based global trade body.

Bloomberg quoted sources at Geneva that are familiar with the matter to have named the second candidate is South Korea’s Ms. Yoo Myung-hee.

History is about to be made as WTO is expected to have its first female director-general in its 25-year history.

The United Kingdom’s Liam Fox, Kenya’s Amina Chawahir Mohamed Jibril, and Saudi Arabia’s Mohammad Maziad Al-Tuwaijri did not secure enough support in the second round of consultations; Bloomberg quoted insiders familiar with the matter as saying.

EU member states threw their weight behind the two finalists, which gave them the much-needed boost.

Rather than voting, the 164 WTO member states make decisions by consensus only, and have been narrowing down the field of candidates through lengthy consultations.

Okonjo-Iweala, 66, served as her country’s first female finance and foreign minister and has a 25-year career behind her as a development economist at the World Bank, eventually becoming its number two.

She is also on Twitter’s board of directors and is a special envoy for the World Health Organization’s Covid-19 fight.

If Okonjo-Iweala wins, she would become the first African to lead the global trade body in its 25-year history.

“Thanks, WTO members for your continued support of my candidacy,” she said on Twitter.

“I could not have made it without the prayers and support of all Nigerians and friends around the world,” she added.

Yoo tweeted that she was “deeply grateful and honoured” to have made it through.

“We need a capable and experienced new leader who can rebuild trust and restore relevance of the WTO. I look forward to your continued support,” she said.

Yoo, 53, is South Korea’s first female trade minister. She has enjoyed a career in trade diplomacy and foreign affairs in which she struck free trade agreements with China and the United States.

“Both of the women in the final round are remarkably well-qualified,” Rockwell said.

“This is something on which everyone is agreed. We’ve been impressed with them from the very beginning. They are people with long experience dealing with tricky issues.

“It’s clear that whichever woman assumes this job will have a very full plate from day one.”

Tuwaijri, who was knocked out of the contest, said he was “extremely confident” that either of the remaining candidates would “steer the WTO in the right direction, to the benefit of all”.