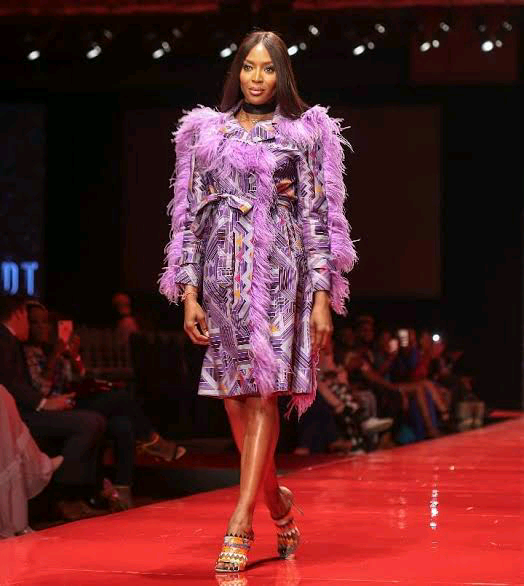 A Nigerian fashion designer Chukwuma Ian Audifferen was ecstatic during the weekend after he spotted one of his designs worn by fashion legend Naomi Campbell at the Arise Fashion week.

Seeing her rock his design surprised him, as he stated that he had no idea she was going to wear his piece.

“Naomi Campbell closed the runway show in my piece and it was sublime,” said Audifferen of the December event, which celebrates young African designers.
The 30-year-old said he was “startled” when he saw the supermodel strutting down the runway in Lagos, Nigeria in the geometric-patterned poncho. “I had no idea that she was going to wear my piece. She just looked like perfection.”

In an industry so competitive, the surreal moment is cemented in Audifferen’s mind as one of his career highlights.
“It was one of those moments that made fashion so worthwhile for me,” he said.

Audifferen who did not set out to be a fashion designer, studied microbiology in the university of Lagos to appease his father

Whilst studying microbiology he interned for Lagos Fashion Week and Arise Fashion Week, a competition for young designers hosted by Nigerian media group Arise. It gave him a taste of the fashion world — and he was eager for more.
After graduation, Audifferen began making shirts. “(People) bought these items off my back,” he said. “I’d wear a shirt that I had made to an event or somewhere, and they would just want it.”

Published in Celebrity, Entertainment and Fashion