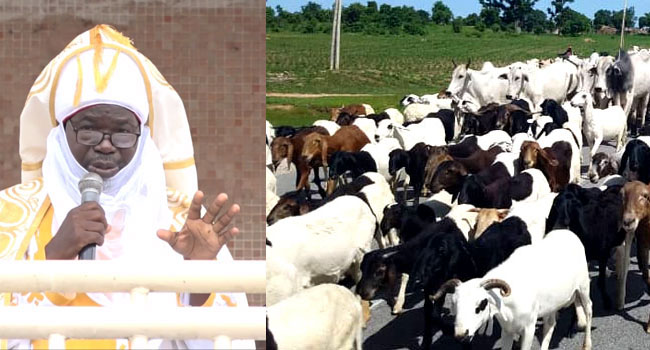 The Emir of Muri Empire in Taraba State, Abbas Tafida has issued a 30-day ultimatum to Fulani herdsmen terrorizing residents of the state to vacate forests within the state or be forced out.

The ultimatum was given on Tuesday by the Emir after Eid prayers.

This follows a rising spate of kidnappings, killings, and attacks in the state by criminals suspected to be Fulani herdsmen.

The Emir, who spoke in the Hausa language, urged the leadership of Fulani herdsmen to fish out the bad eggs among them.

“Our Fulani herdsmen in the forests, you came into this state and we accepted you, why then will you be coming to towns and villages to kidnap residents, even up to the extent of raping our women?

“Because of this unending menace, every Fulani herdsman in this state have been given 30 days ultimatum to vacate the forests. We are tired of having sleepless nights and the hunger alone in the land is enormous and we will not allow it to continue,” the Emir said.

The Emir also warned that anyone conniving with kidnappers or protecting them from being prosecuted will be punished severely, including police officers.

He said, “From now onwards if anyone is kidnapped from this emirate, we will go into the bush and kill any Fulani man we see and we will not ask for his name or what he does because the Fulanis cannot say they do not know the kidnappers, they had better stop them.

“Our young people are inactive. Police at a time caught a district head conniving with kidnappers and they gave him bail, he had the audacity to go back to his district and the youths did nothing.

Fulani herdsmen have been on the front burner of discourse in Nigeria since President Buhari – himself a Fulani – came into power. They have wreaked havoc on indigenous communities, destroyed farmlands, raped women, and killed with reckless abandon.

The Nigerian government have done little to nothing to clamp down on this menace, and have been accused by citizens of abetting and pampering the killer, semi-illiterate marauding herders.