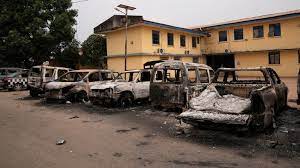 More than 1,800 inmates were freed after shadowy gunmen raided an Imo State prison in Southeast Nigeria, blowing up the facility and setting 50 vehicles on fire. The attack has been described as one of the West African country’s largest jailbreaks.

After blasting their way into the Owerri prison in Imo state and engaging guards in a gun battle, inmates escaped the prison facility in their numbers, the national corrections authority said in a statement.”I can confirm that the Imo State Command of the Nigerian Correctional Service was attacked by unknown gunmen in Owerri,” Imo state corrections service spokesman James Madugba told AFP, adding that the number of escaped inmates was yet to be confirmed.

“The situation is under control,” he said.

The assailants arrived in pickup trucks and buses before storming the facility, the correction authority said.

While no group has yet claimed responsibility for the attack, rumours from the grapevine are pointing accusing fingers at members of the Indigenous People of Biafra (IPOB). President Muhammadu Buhari called the attack an “act of terrorism” carried out by “anarchists” and urged security forces to capture the assailants and the escaped detainees.

During the attack, one person suspected to be a fleeing inmate was hit by a bullet while lugging a travel bag. His lifeless body was seen on the ground in front of the correctional centre located near the Government House, along Okigwe Road.

They were said to have operated from 1:00 a.m. till 3:00 a.m. during which they sang solidarity songs at the Government House roundabout for about 30 minutes before attacking the facilities.

On breaking into the prison facility with the aid of explosives and dynamite, the attackers told the inmates: “Go home, Jesus has risen. You have no reason to be here.”

The governor of neighbouring Abia state imposed a night curfew on two towns, a statement said, to protect residents without direct reference to the prison attack.

Prisons in Africa’s most populous country are notoriously overcrowded, and as many as 70% of inmates are on remand and can be held awaiting trial for years.

Nigeria has noticeably regressed under the administration of Muhammadu Buhari, who has done little to nothing to unite the diverse cultural ethnicities that make up the country. Critics accuse him of playing ethnic politics and giving special attention to his Fulani kinsmen, roving nomads who constitute the majority in Boko Haram in the Northwest, and have been accused of kidnappings and gruesome massacres of indigenous farming dwellers across the north and south.

The feckless attitude of the ruling government has led to a massive uprising among the Yoruba and Igbo major ethnic groups, who are calling for secession or restructuring.