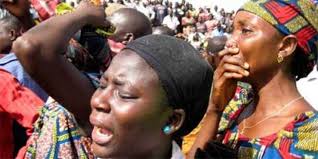 “With over 30,000 dead since 2009, Islamists with an agenda to culturally destroy Nigeria have been unleashing terror with impunity. Having access to high grade weaponry, crucial logistics information and as rumours have it, moles amongst top government officials, a case of full blown war is already on! But the Jihadists tactically exercise precaution, not to alert the over 200 million strong nation, what the reality is”

Recently in central Nigeria’s Kogi state, 14 villagers were murdered by sinister gunmen in what the police questionably termed as “communal violence”.

“I was there and I was part of those who picked up some of the dead bodies we are talking about,” Ayuba stated

He said 13 of the dead were members of the same family.

“In that family, only one person survived. His uncle, his mother, his uncle’s wife, his younger brother, his senior brother’s wife, his wife and all his children were killed,” he said.

Ayuba said an investigation had been launched into the incident, adding that a long-standing row over land rights was a “possible” motive.

It was not stated if this family was Christian