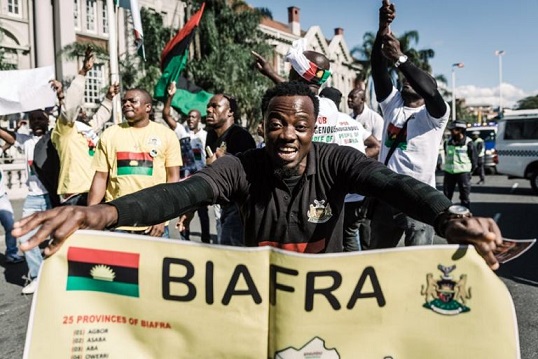 Senate Minority Leader Enyinnaya Abaribe, on Sunday, spoke in defence of the Indigenous People of Biafra (IPOB) and other pro-Biafran agitators over the recent attacks on police facilities and death of some security operatives in the southeast.

According to the lawmaker, the attacks were carried out by persons who intend to destabilise the polity by causing tension within the region.

He also explicitly stated that IPOB and MASSOB are not responsible for the attacks.

“Anybody, who is seeing all these problems in the southeast as coming from the IPOB, anyone trying to pin the insecurity situation in the southeast to IPOB or MASSOB is making a mistake. We do not think so,” Abaribe said.

“Those of us from the southeast here know that this is nothing but fifth columnists imported into Igboland to destabilise Igboland. This is because Igboland is the safest place that we had in this country.

“All they want to do is to cause confusion and make this place ungovernable so that they can go out and say there is terrorism here.

“We are not terrorists. The ethos of the Igbo man is very simple: live and let live. We build; we don’t destroy. We never kill because we take life very precious.

“So, anyone telling you all these, it’s people who come from elsewhere trying to destabilize Igboland. But, it will never happen,” the lawmaker disclosed.