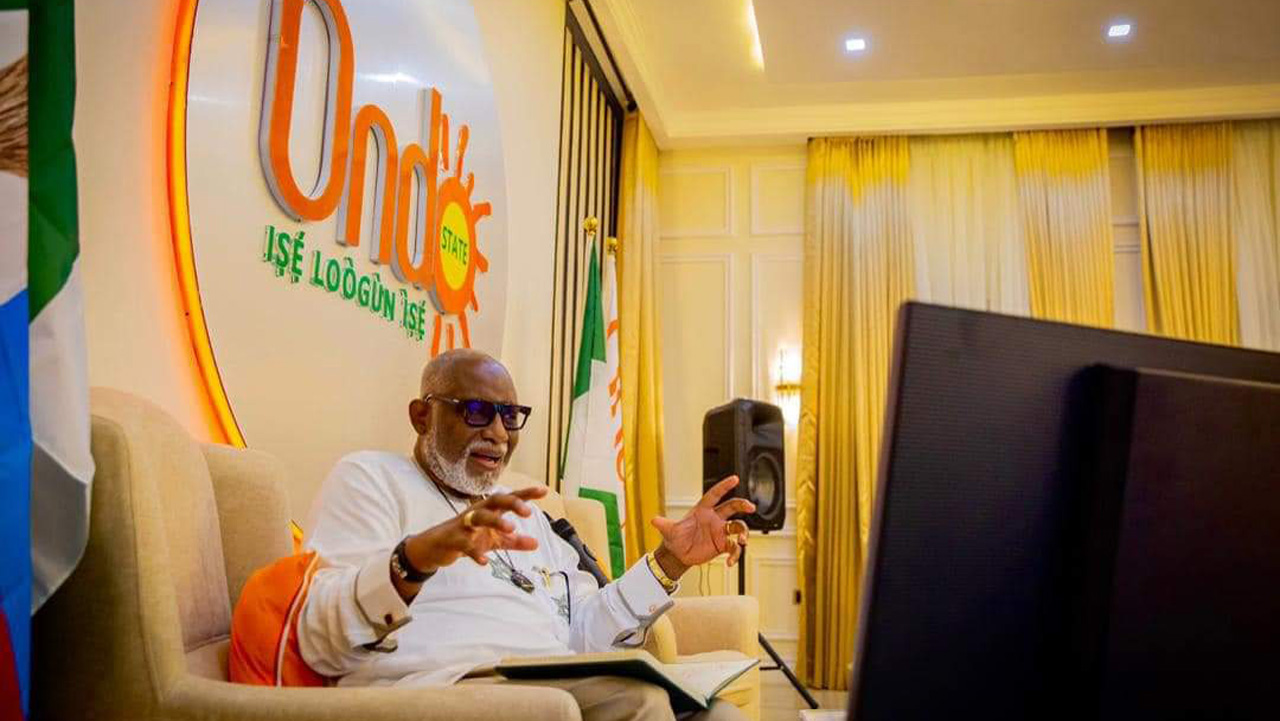 Nigeria: “No Land In The South Will Be Ceded To A Band Of Invaders” – Southern Governors Chairman Akeredolu

The chairman of Southern Nigeria Governors Forum, Governor Rotimi Akeredolu of Ondo State, on Tuesday knocked the Buhari presidency for antagonizing the ban on open grazing by the southern governors.

However, Governor Akeredolu said Garba Shehu lacks the authority to make such policy statements for the Federal Government, an indication that President Muhammadu Buhari’s government is not organised.

Akeredolu, while speaking through his Special Assistant on Special Duties, Dr Doyin Odebowale, maintained that no inch of land in the southern part of the country would be ceded to anybody under any guise, and warned Shehu and his cohorts to desist from hurling insults at the elected representatives of the people, accusing him of serving a particular interest and not the presidency.

Garba Shehu, like the president, is of Fulani extraction.

Akeredolu maintained that the president’s aide lacks the authority to make such policy statements for the Federal Government which has failed to provide solution to the farmers/herders crisis that has bedevilled the nation for years.

The statement reads: “Mr Garba Shehu just released a press statement purporting to represent the position of President Muhammadu Buhari, on the farmer-herder ‘clashes’ and what he termed as ‘Deep Rooted Solutions’ to the herdsmen attacks.

“He also attributed a unilateral decision to the president who “clears the way for ranching and revival of forest reserves” as part of the “permanent solution to the frequent clashes between them, as well as the associated problem of the gun-wielding “killer-herdsmen”.

“Anyone who has been following the utterances of this man, as well as his fellow travellers on the self-deluding, mendacious but potentially dangerous itinerary to anarchy cannot but conclude that he works, assiduously, for extraneous interests whose game plan stands at variance with the expectations of genuine lovers of peaceful coexistence among all the peoples whose ethnic extractions are indigenous to Nigeria.

“Mr Garba must disclose, this day, the real motive(s) of those he serves, definitely not the president. He cannot continue to hide under some opaque, omnibus and dubious directives to create confusion in the polity. The easy recourse to mendacious uppity in pushing a barely disguised pernicious agendum is well understood.”

The governor maintained that the southern governors have the constitutional right as elected representatives of the people to decide on issues affecting their citizens.

“Mr Garba contends that “their announcement is of questionable legality”, referring to the 17 governors of the Southern States, but the decision of certain elements to take the ancestral lands of other people to settle their kinsmen, including the “gun-wielding “killer herdsmen” and their families, and provide “veterinary clinics, water points for animals, and facilities for herders and their families, including schooling through these rehabilitated reserves” for which “the Federal Government is making far-reaching and practical changes allowing for different communities to coexist side-by-side”, does not appear to him as a comprehensive plan for land grabbing, a precursor to internal colonialism.

“He wants to “revive forest reserves” but seems particularly uninterested in the current position of the same law that he and his cohorts often misinterpret to serve parochialism and greed. Governors no longer have powers over the lands in their territories. They must take instructions from appointees of the Federal Government on such matters.

“It is superfluous, and that is being charitable, for anyone to remind us of the constitutional right of bona fide citizens “to enjoy rights and freedoms within every one of our 36 states (and FCT)-regardless of their state of birth and residence.”

He said further that “There has never been any contention on this provision. It is clear that Mr Garba seems to have issues understanding the difference between licentious criminality and qualified rights under our law. It is our duty to continually nudge him off his current state of cognitive dissonance. His pronouncement betrays dubiety and mischief.

“Most traditional families in Nigeria have occupations. Pastoralism is not an exception. Any ethnic group still trapped in anachronism may be assisted to embrace modernity. Dispossessing communities of their ancestral lands, encouraging denizens of the forests to overrun lands belonging to other people and forcing alien bands of migrants on the local populace to live “side-by-side” with other communities cannot be for the purpose of animal husbandry.

“It raises suspicion on a grand, deliberate, persistent and insidious design to use naked force to subjugate the real owners of the land. Mr Garba Shehu is a major supporter of the current pervasive anarchy in the land.

“May we warn Mr Garba Shehu and his cohorts to desist from hurling insults at the elected representatives of the people. He lacks the authority to make policy statements for the Federal Government, unless directed, expressly. His acts are clearly those of an agent provocateur. Other closet dreamers, aspirers to colonial fantasies, must be weaned off their delusion.

“No inch of the space delineated and known, currently, as South West, and indeed the whole South, will be ceded to a band of invaders masquerading as herdsmen under any guise”.