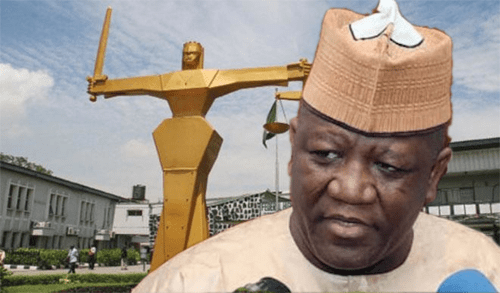 Numbering 978, the bars of gold were reportedly intercepted at Kokota International Airport Accra Ghana by the Ghanian Customs officials.

According to the developing story by Sahel online which African Community News is following, the bars of gold were carefully sealed in 9 Cartons of Rothmans en route to United Arab Emirates UAE in Company of one of the former Governor’s Lagos based loyalist.

“At as the time of filling this report, Ghanian Anti-corruption agencies are carrying out an investigation.

“Meanwhile, Mr. Jide Oke who accompany the suspicious bars of gold is currently under the Airport detention facilities.

“Recall some years back, the Economic and Financial Crime Commission, EFCC uncovered a five Star Hotel in Lagos which allegedly belong to the former Governor of Zamfara state Abdul Aziz Abubakar Yari. In the process, an investigation showed that, Yari built the Hotel with Zamfara state bailouts funds that was meant to pay salaries and outstanding retired Civil Servants gratuities,” the report stated.

Zamfara State is in Nigeria’s northern region. The state is Nigeria’s gold hub, but proceeds from the natural resource is barely felt by the citizens. The Nigerians in the south accuse northern leaders of hoarding the Zamfara gold proceeds while benefiting from oil revenue from the southern region.