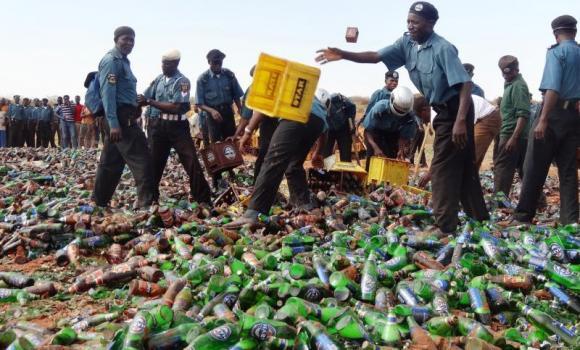 The Islamic security outfit in Kano State called Hisbah has destroyed 1,975,000 bottles of beer worth over N200 million confiscated within Kano metropolis. The destruction exercise was carried out at Kalebawa in Dawakin Tofa Local Government Area of the state by Governor Abdullahi Umar Ganduje, Vanguard reports.

In his remarks, the Commander General, Kano State Hisbah Board, Sheikh Harun Muhammad Ibn Sina said that the beer confiscated is worth over N200 million. He further said that the board got a court order to destroy over 20 trucks of alcohol.

Rendering a speech at the event, Governor Ganduje, represented by his Deputy, Dr Nasiru Yusuf Gawuna, said consumption of alcohol and all other intoxicants could distort the mental capability of a person and that it is forbidden in Islam.

“Even in Kano, we have banned the consumption of beer in all parts of the State,” Ganduje emphasised.

In a statement by the Chief Press Secretary to the Deputy Governor, Hassan Musa Fagge quoted Ganduje as saying that the Hisbah Board was established to prevent “evil social acts in the society.”

He explained that as part of his administration’s efforts in enhancing the welfare of the Hisbah, there would be a salary increase and new uniforms for the security unit before the year runs out.

“My administration is proud of the way you discharge your duties..therefore I wish to urge all stakeholders to continue to give you all the support you need to succeed,” the governor said.

Many Nigerians have questioned the legitimacy of the Hisbah Islamic Police in northern Nigeria, as the country is supposed to be a secular state and, according to the 1999 constitution as amended, the only legal police outfit is the Nigerian Police Force. Critics of the move say the Fulani-led government is trying hard to mix the Islamic religion with state policies, which is against the constitutional law.

Also, a good number of Nigerians – especially from the south and middle belt – have called out the hypocrisy of the northern Islamic elites for considering alcohol haram yet receiving proceeds from the sales of alcohol around other parts of the country.

Below is a cross-section of reactions from Nigerians on Twitter:

Kano State and other northern states going about destroying alcoholic beverages are making a statement to the world that they are not secular states, hence making them unfertile grounds for foreign investments and tourism.