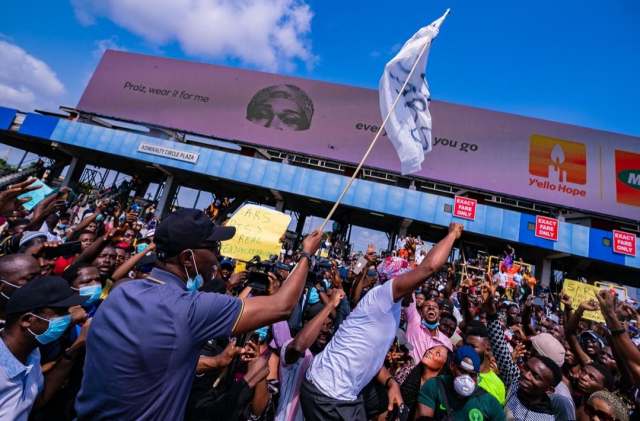 In solidarity with the #EndSARS and #EndSWAT protests in Nigeria, an international group of hacktivists, Anonymous, has allegedly hacked into the website of the Special Anti-Robbery Squad (SARS) as well as President Muhammadu Buhari’s system, local media reports.

Sensitive information about the Nigerian government’s activities and the details of the SARS officers, including their phone numbers and bank information were revealed on social media as at Wednesday night.

The group, which stated this in a series of tweets on its Twitter handle, @YourAnonNews, made some revelation about the activities of SARS and threatened President Buhari.

The special Twitter page they created for Nigeria on October 12, has been temporarily restricted.

The tweet on Buhari which it posted on Thursday morning read, “The only thing weaker than @mbuhari’s computer security is his self-esteem and self-worth. No President of any nation should have the time to concern themselves with ‘sodomy.’

“‘…..(unprintable)’ really kind of fits ⁨@MBuhari⁩ in a different way. But, we’re sure this will make him even more uncomfortable. What a derp. ⁨#EndSARS⁩ ⁨#EndSWAT⁩”.

Nigerians both home and abroad have been relentless in their protest against extrajudicial killings and police brutality. Although the Nigerian government claims to have ended SARS, some say they are still getting harassed by men of this unit, who could still be found on the road. Also, it wasn’t up to 48 hours after declaring that the dissolution of SARS, the IGP announced the formation of a new unit known SWAT to replace SARS.

Nigerians are protesting against the new unit, claiming it is the new face of SARS. They are demanding a total reform of the police force and the prosecution of those officers who killed protesters, which the police are yet to do.

What’s more, the #EndSARS protest has morphed into an agitation against bad governance and the legislature, who earn insane amounts of money but do close to nothing to improve the standard of living for Nigerian youths.