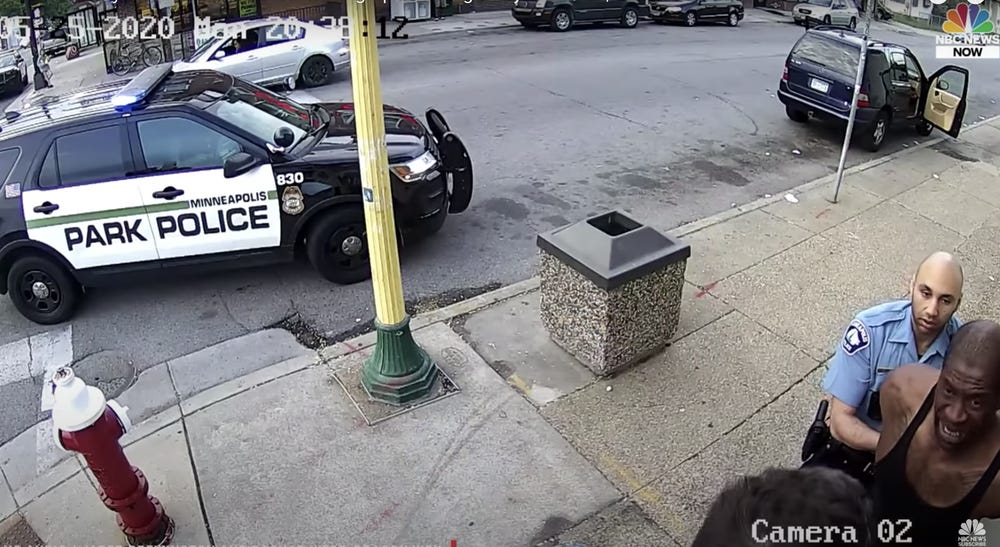 A new surveillance video from a Minneapolis restaurant near where George Floyd was handcuffed by police officers on Monday has shown that he didn’t resist arrest.

In the video obtained by NBC News which has an hour’s worth of security footage from about 8:30 p.m. when the police arrived at Cup Foods to investigate reports of a customer trying to pay with counterfeit money, it appeared George Floyd didn’t resist arrest as the police had claimed.

Two rookie officers first found Floyd, 46, sitting in a parked car, the Star Tribune reported. In the video, which has no audio, a police officer approaches the car and addresses the people in it before a man gets out from the passenger side and a woman gets out from the back seat. The officer then walks around to the driver’s side, and Floyd emerges in handcuffs a few minutes later.

Another officer, who has a mask on his face, can be seen asking the woman to back up toward the wall, which she does, with her hands raised in the air.

Floyd, who can be seen saying something to the police officer, is led onto the sidewalk. With his back against the wall, he slides down to the ground while the officer talks to him. Another cruiser then pulls up with two more officers, whom the Star Tribune identified as Derek Chauvin and Tou Thao.

While the officer talking to Floyd jots down something in his notepad, Floyd appears to slump over. He stays in that position while talking to the officer before he is helped to his feet.

With one hand wrapped around Floyd’s bicep and the other on his cuffed wrists, the officer leads him a few feet along the wall. Floyd can be seen turning around, looking at his wrists, and grimacing and yelping in discomfort.

Floyd can also be seen shaking his head at the officers as he’s guided out of the security camera’s frame. A few seconds later, two officers and Floyd can be seen crossing the road before Floyd falls to the ground.

According to the Star Tribune, that’s where Chauvin restrained Floyd with his knee on his neck for eight minutes, despite Floyd saying, “Please, I can’t breathe.”