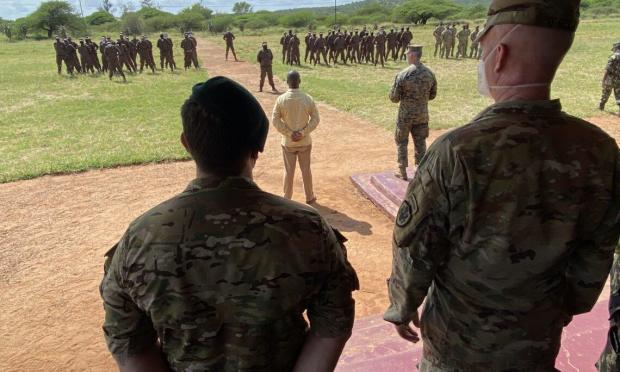 In just one year, militants said by American officials to be linked to ISIS have captured huge swaths of territory in northern Mozambique. Hundreds of civilians have been beheaded and thousands killed in the insurgency’s rampage across the Cabo Delgado region, the speed and brutality of which has taken everyone there by surprise.

Entire villages have been cleared out amid the rapidly accelerating conflict near some of the world’s biggest natural gas reserves. The militants have killed at least 2,000 civilians and forced almost 700,000 to flee their homes.

Those who’ve managed to escape are growing increasingly frantic: Food is running out.

“I am very, very hungry” said a desperate Yusuf Salima. “I have been three days… eaten nothing.”

People are still fleeing from the terror in droves, often setting off in boats down the southeast African nation’s coastline to set up makeshift camps in the hope of evading militants with a taste for butchery.

Many children are among the victims, and those who’ve managed to run for their lives, and they’re left traumatized.

Sickening “to the core”

Said Amade’s brother was beheaded along with six others from his town. Now Amade is looking after his brother’s children.

“We have nothing left,” he said. “The men who attacked our village told us: ‘We kill as we please.'”

Alberto Carlos can only guess what happened to his 14-year-old granddaughter.

“I don’t know if they took my granddaughter to marry her or kill her,” he said.

Stories of sickening acts of violence against children abound. Save the Children said in a report released on Tuesday that it has received reports of kids as young as 11 being beheaded.

One mother described to the charity her ordeal as she tried to flee into the woods with her children, but the armed men attacker her village grabbed her eldest son, who was 12. She said she hid with her three other children as he was murdered nearby.

Save the Children’s report said it has largely been young boys killed by the militants, while girls are often captured and forced to “marry” the jihadists – forced, in other words, to become sex slaves.

The charity’s director said the reports “sicken us to the core.”

Mozambique has struggled to counter the insurgency, and it is certainly nowhere near winning the fight. Cabo Delgado has had a festering insurgency for more than three years, but the past year has seen a dramatic escalation of the conflict.

This sudden acceleration, coupled with the extreme brutality, has taken everyone — including U.S. military officers and diplomats in the region and Mozambique’s own counterterrorism officials — by surprise.

A terror group that numbered perhaps a couple of dozen fighters at the end of 2017 is now estimated to have swollen its ranks to as many as 800 fighters, with the ability to carry out strikes in neighboring Tanzania, where analysts believe it has links with smuggling and criminal networks that provide weapons and other equipment.

Many of the refugee camps in the area have doubled in size over the last three months alone, giving some sense of the speed at which the crisis has snowballed.

Mozambique’s response has been hampered in part by divisions between the country’s military and its powerful police force, leading the government to turn to private soldiers for help. Two years ago, more than 150 soldiers-for-hire from the Russian Wagner Group, a Kremlin-linked private military company, flew into Cabo Delgado.

They left with their tails between their legs, however, beating a hasty retreat after at least seven of their own were killed on the battlefield.

Next Mozambique turned to mercenaries from South Africa, who came equipped with small helicopters armed with machine guns. Amnesty International recently accused these forces of possible war crimes, including the blatant killing of civilians, and they’ve demonstrated no real ability to combat the insurgents.

American officials have watched this all play out with deep concern. Last week the United States formally designated the ISIS group in Mozambique, known locally as Al-Sunna wa Jama’a, as a global terrorist entity and imposed sanctions on its leader, named by the U.S. as Abu Yasir Hassan.

The U.S. is convinced the group’s link to ISIS is clear — particularly, as one senior State Department officials told us — when you look at their battlefield tactics, which have developed and evolved.

This week, the U.S. Embassy in Mozambique’s capital Maputo announced the start of a two-month military training program that will see American Special Operations Forces train Mozambican marines, “to support Mozambique’s efforts to prevent the spread of terrorism and violent extremism.”

The State Department official told CBS News that, in addition to the training, the U.S. government is working to provide Mozambique with training in civil-military affairs capability; combat casualty care programs, and other specialized training. Washington is also in discussion with the Mozambican government to provide training with the Ministry of Interior, to develop counterterrorism units within the police force.

The U.S. Embassy said the U.S. would also provide medical and communications equipment as part of what it called “a multifaceted and holistic approach” to defeating ISIS in Mozambique.

That support could be vital as the nation, long accustomed to civil war, pivots to face a homegrown jihadist threat.

The benefits of all the ramped-up cooperation, however, won’t be immediate. In the meantime, a once idyllic tropical paradise has been turned into a place of terror, hidden in a remote corner of the world that is often forgotten, and largely ignored.