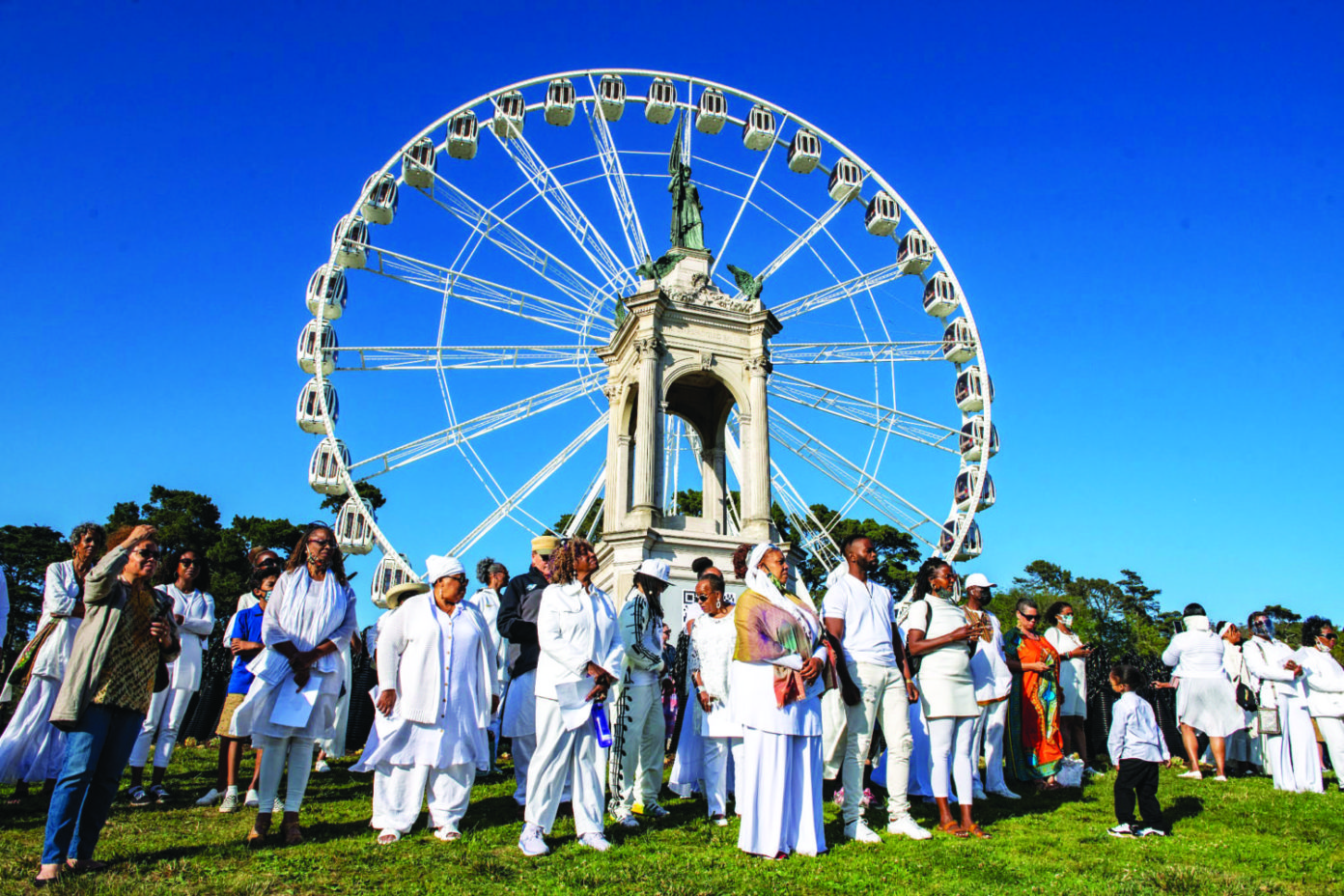 Memories Live In Our Blood. Our Ancestors Live In Us.

People are rising up to remove and destroy these symbols of racism and white supremacy which guide the thinking and economic and political policies making this country. On the first Juneteenth National Observance, San Francisco installed 350 African Ancestors.

Dana King, artist, Black Bodies in Bronze, created 350 sculpted pieces to honor the original 350 Angolan captives taken from home in 1619. The Ancestors, depicted as female, surround the plinth where just one year ago a statue of Francis Scott Key, slave owner and supporter of African disenfranchisement and subjugation, came down.

The empty plinth is one of many toxic spaces throughout America where the Ancestors are needed in a tangible way to counter the dominant racist narrative. It is not enough to decommission these historic landmarks. Municipalities need to surround these places with a counternarrative calling for a “reckoning” or “accountability” to the people harmed – Black people. In San Francisco, this public accounting has been given two years.

Resistance is what it will take to change a landscape the powerful do not want disturbed. Wrecking or toppling thoughts and ideas and policies and laws that do not serve all equally, especially African descendants of these 350 Ancestors and the other 10 million over 250-300 years, is what this public document is about.

Dana King is an alchemist. The Ancestors speak through her hands. She channels their power and humbly allows it to flow through her fingers into bronze, steel, wire tubing. The Ancestors’ faces are tipped slightly up so they see the sky. Moonlight caresses their thoughts.

Freedom is on their minds as the refrains of “Lift Ev’ry Voice” echo silently from the Spreckels Temple of Music, as the procession walked from one side of the concourse to the other, as the audience stood in respect on Friday, June 18.

This grand procession is led by women drummers who conjured and embodied with the other women and men singing “Lift Ev’ry Voice,” the Black National Anthem, a spirit of Sankofa: Remembrance and Resistance.

These diminutive ancestors, like their creator, don’t play. Memory lives in the blood. Our ancestors live in us.

It is up to those of us who are “ascendents” of these 350 plus survivors over 402 years later to “march on till victory is won” – and after that too.

King is an alchemist who breathes life into bronze or any medium she chooses to shine or allow light to pass. Aṣe.

We must never forget how great we are. Great people behave like great people. We do not let others take us out of our form – no excuses. The 350 Ancestors are lovingly holding everyone accountable. Ase.

Dana King’s Ancestors stand opposite the Spreckels Temple of Music where Ben Davis, Illuminate, hopes to get permission from the SF Historic Sites Commission to add the words “Lift Ev’ry Voice” to its stage.

Monumental Reckoning considers the recent removal of public art depicting historic villains like Francis Scott Key, who by their very presence condone the continuation of policies and practices that deny Black people access to true democracy and with it, freedom.

On Friday, June 18, 5 p.m., the program opened with a wonderful musical tribute by Warmth of Other Suns led by Martin Luther McCoy. Queen Rhodessa Jones, co-artistic director at Cultural Odyssey, was emcee.

SF Poet Laureate Tongo Eisen Martin shared a poem. Mayor London Breed gave a few remarks which included stories of her strong grandmother, who was a sharecropper in Texas and decided – like many other African Americans – to leave for a better life in the North. She settled in San Francisco.

Mayor Breed gave city employees the day off to acknowledge and honor Freedom Day, the newest federal commemoration and now a City of San Francisco holiday.

Mayor Willie Brown arrived too late to speak, but he was front and center at the libation ceremony which followed the procession.

Dana King, sculptor, acknowledged the elders and gave the history of Monumental Reckoning. She told the story of her research and desire to bring these 350 Ancestors to hold space for freedom and liberty where injustice was elevated for too many years.

I call her the Ancestor Lady. For those who know her work – King is an alchemist who breathes life into bronze or any medium she chooses to shine or allow light to pass. Aṣe.

The 350 Ancestors represent, King said, the Angolan ancestors taken from home August 1619 on a Spanish ship, then twice stolen by English pirates in the Gulf of Mexico where 10-20 ended up in the English colony where they were traded for provisions at Old Fort Comfort, which is now known as Ft. Monroe National Monument in Hampton, Va.

King hit the singing bowl four times for the 400 years of African history and then began to sing the Hon. James Weldon Johnson’s hymn “Lift Ev’ry Voice.” The lyric was picked up by all present who began to line up behind the drummers. Heart and Soul Center of Light and Glide Church choirs participated.

Led by Mar Stevens, all the drummers wore ancestor pigment on their faces as they marched. The women looked both regal and fierce as we all sang ourselves closer and closer to the plinth where the ancestors awaited us.

Dressed in white, the “official processioners” invited other African descendants along this Sankofa journey in Golden Gate Park to join us while others in the audience stood in respect for the solemn funeral march.

It is one thing to think 10 million; it is another to see 350 ancestors and imagine that number multiplied. It is a lot of people, a lot of Black people.

An altar with tulips, candles, water and food was in place. It was in front of the altar that Rev. Andriette Earl, King’s pastor, Heart and Soul Center of Light, led us in prayer. It was a beautiful invocation and opening of the way.

I wrote two libations and then combined them – long story. I tried to highlight the lives of native San Franciscans, knowing that the communities in San Francisco and the East Bay were tighter knit then than now and knew each other well, so I also mentioned prominent citizens on both sides of the Bay, especially those born in the early 20th century whose grandparents were enslaved.