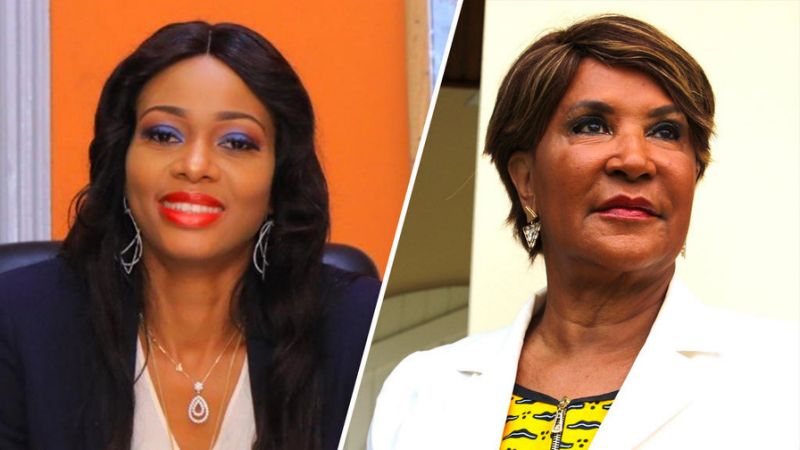 Meet Two Of The Women Running For President In Male-Dominated Ivory Coast!

Despite the male-dominated political landscape in Ivory Coast, a handful of women intend to stand for president in the October election. Among them are Marie Carine Bladi and Danièle Boni Claverie, who offer a study in contrasts: one is a relative newcomer, a beauty queen making waves, while the other is a seasoned politician.

But Article 36 of the new constitution, introduced at the end of 2016, says the state must seek “the promotion of political rights for women by increasing their representation in elected assemblies”.

While a new law introduced in 2019 stipulates that at least 30 percent of candidates fielded by parties for parliamentary and regional elections must be women, there is still a long way to go.

Only 15 percent of government ministers are women – in the National Assembly, this percentage drops to just 12 percent. But Gogoua does not believe that traditional cultural or societal barriers facing women are to blame.

“Men don’t put women in political positions under the pretext that women themselves don’t want to be candidates,” she said. In reality, she believes it boils down to economics and male fragility.

“Women are poorer than men. They don’t have the resources to finance their campaigns,” she said. “There is also resistance from men in the cities. Men in suits and ties think women are coming to take their place. But such places shouldn’t be reserved for anyone. Women, like men, are part of society. They must both contribute to the development of this country. Everyone has their place.”

Until now, the most influential woman in Ivorian politics has been Simone Gbagbo, who served as First Lady between 2000-2011. She has since divorced her husband.

Despite the male-dominated political landscape, a handful of women intend to stand for president in the upcoming election. Among them are two highly contrasting figures, Danièle Boni Claverie and Marie Carine Bladi.

A seasoned politician, Boni Claverie enters the presidential race as the candidate for the Union Républicaine pour la Démocratie (URD), the centrist party she created in 2006.

She began her career as a journalist, climbing to become president of Canal Horizons, a TV channel broadcasting across Africa and the Middle East. She has also served as the director of the country’s national broadcaster, RTI.

In 1994 she was scouted and named as the minister of communications during the presidency of Konan Bédié, who was ousted five years later in a bloodless coup.

Disillusioned with the Democratic Party (Parti Démocratique de la Côte d’Ivoire or PDCI), Boni Claverie swiftly aligned her new party with former president Laurent Gbagbo’s Ivorian Popular Front. “We had a very strong start,” she said. “We had lots of members, we were very well-structured and we followed a moderate line. We never allowed ourselves to enter into extreme discourse.”

Astute political manoeuvring allowed Boni Claverie to obtain a second ministerial post as the minister of women, family and children under Gbagbo’s government. Since then, she has been in the opposition.

Such success did not come easily. “Like all women, I had to assert myself twice as hard. On a professional level, even in my career as a journalist, I saw boys and men get ahead of me with promotions that weren’t totally deserved,” she said.

Her party’s slogan is, “Change and Construct”.  Their priorities include tackling youth unemployment and the “integration” of immigrants within Ivorian society.

Like most candidates, she also stresses the need for stability in a country where the last post-electoral crisis that saw Ouattara unseat Gbagbo in 2010-2011 claimed more than 3,000 lives.

Since President Ouattara said he would run for a third mandate, in what most legal experts consider a violation of a constitutional rule that establishes a two-term limit, at least six people have been killed in street protests. There are already signs that the unrest is morphing into communal violence, in towns such as Bonoua, some 50 kms (31 miles) from Abidjan.

While insisting, “I don’t like stereotypes,” Boni Claverie thinks women might be uniquely placed to lead the country away from such tensions. “Women manage their households every day. We have experience in settling conflicts. We have a natural way of mediating and using words that can appease people. All of this must be put to the service of the collective.”

Boni Claverie has already been lobbying to bring more women into municipal councils and says she will make the eradication of female genital mutilation a priority if she gets into office. She also promises to make school textbooks free for all primary school children.

“It would benefit girls especially, who are often victims of selection in families who don’t have the means to pay to educate all of their children,” she said. Broader access to education could create a new generation of female leaders.

The first runner-up in the Miss Côte d’Ivoire 2002 beauty pageant, Carine Bladi is a relative newcomer to politics but was the first woman to declare her candidacy for October’s election.

“She is young and beautiful but still has a sharp mind. I think she is bringing in some freshness in the debate,” confided one male member of a rival party to FRANCE 24.

She is standing as the head of Nouvel Ivoirien Côte d’Ivoire Nouvelle, a political party she created in 2018 that describes itself as “divine” and rooted in “biblical truth”.

“All political alliances in Ivory Coast have failed and led Ivorians into torment,” she wrote in a statement. “The only true alliance that will save Ivory Coast is that which is sealed in respect of divine principles of love for one’s neighbour, peace, social cohesion and true conciliation.”

The party declined to send a manifesto or discuss their political platform with FRANCE 24.

Before entering politics, Bladi was a businesswoman, leading companies such as De Collins, Noces de Cana and Victoire Transport. She also designed a clothing line aimed at married women.

In a statement released by the party, Bladi said that she hopes her candidacy will inspire other women to enter politics.

“We must believe in ourselves and our potential. I am convinced that the best presidency in the history of Ivory Coast will be that of a woman. Women should not ask [for] but take what they deserve,” she said, adding: “We often hear that women are the pillar of the family. So who better than a woman to be the pillar of the nation?”