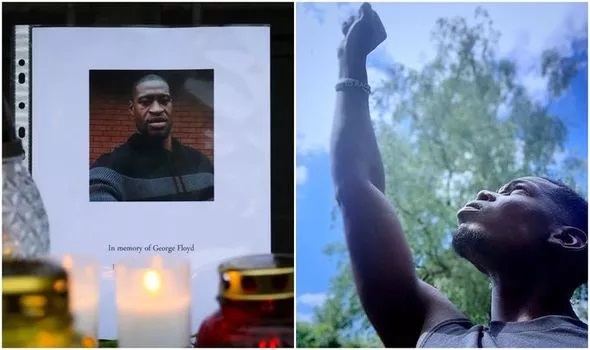 Manchester United midfielder, Paul Pogba has joined millions of people across the world to call for an end to racism by supporting the Black Lives Matter movement.

He also condemned the killing of Black man, George Floyd in Minnesota.

The midfield meastro took to his social media page to share photos.

According to him, the death of Floyd in the hands of a police officer left him in “anger, pity, hatred, indignation, pain” and “sadness”.

Floyd, a 46-year-old innocent Black man, died in Minnesota after fired police officer, Derek Chauvin, kneeled on his neck for almost nine minutes, whilst other officers seized his legs and back

The four officers at the scene have been fired from the Minneapolis Police Department and Chauvin has been charged with murder.

In a heartfelt message on Instagram, Pogba wrote: “During the past few days I have thought a lot about how to express my feelings about what happened in Minneapolis,” Pogba wrote.

“Sadness for George and for all black people who suffer from racism EVERY DAY!

“Whether in football, at work, at school, ANYWHERE! This has to stop, once and for all!

“Not tomorrow or the next day, it has to end TODAY! Violent acts of racism can no longer be tolerated.

Pogba’s United team-mate Marcus Rashford also wrote against racism on Instagram and Twitter: “I know you guys haven’t heard from me in a few days.

“I’ve been trying to process what is going on in the world.

“At a time [when] I’ve been asking people to come together, work together and be united, we appear more divided than ever.