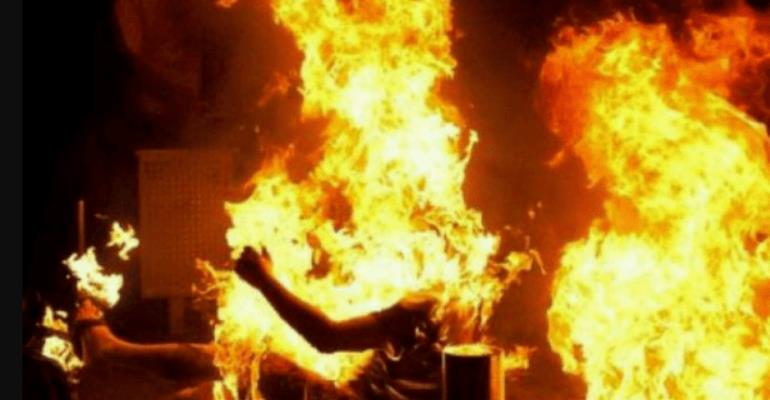 Libya: Black Worker Doused With Petrol And Set On Fire By Arabs!

A Black migrant worker in Libya was burned to death in a Tripoli factory, according to a statement by the Libyan interior ministry on Wednesday, in a fresh reported attack on Black migrants in the north African country. According to reports, three Arab men stormed a factory in Tripoli and doused a Black male worker in petrol, setting him on fire.

The motive behind the despicable crime is yet to be given.

A statement by Tripoli’s interior ministry on Wednesday said the suspects — all Arab Libyan nationals — had been detained for the murder of the Black man, who has not been named but believed to be Nigerian.

“We are horrified by the killing of a Nigerian migrant worker in Tripoli, #Libya by three Arab men yesterday. The young man was burned alive, in yet again another crime against Black migrants in the country,” tweeted Federico Soda, head of the UN’s International Organization of Migration mission in Libya. “Those responsible must be held to account.”

U.N. spokesman Stephane Dujarric said: “Sometimes you run out of adjectives to describe what we see in all too many places.”

“The people responsible for such a heinous attack need to be brought to justice,” he said. “This underscores, as if we needed to underscore yet again, how unsafe Libya is for migrants, for refugees, and how much the authorities on the ground still need to do to ensure the protection of these vulnerable people.”

The death of this Nigerian migrant worker underscores the perils that Black migrants face in war-torn Libya, which has emerged as a major transit point for African and Arab migrants fleeing war and poverty to Europe.

In 2017, CNN aired a video of a slave auction in Libya where Black migrant were “sold like goats,” causing global outrage, and led the U.N. Security Council to hold an emergency meeting to condemn “heinous abuses of human rights.”

According to a 2020 statistics, the U.N. migration agency reported around 200 deaths of migrants in Libya and at least 275 missing in the Mediterranean Sea. Around 9,500 were returned to Libya this year, compared to 9,225 in 2019. The bodies of 11 migrants washed up on Libyan shores between Sep. 28 and Oct. 5, it said Tuesday.