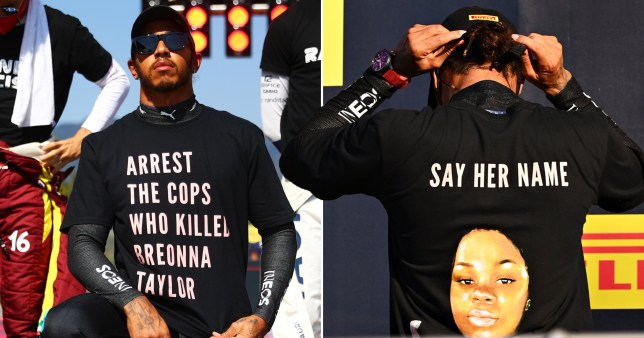 During the Tuscan Grand Prix on Sunday – both before the race and after he won, on the podium, Hamilton took a knee and made sure to show off his brand new T-shirt, with the following inscription emblazoned on it: “Arrest the cops who killed Breonna Taylor,” the message on the front read, while the back had a photo of the late emergency medical technician and the text “Say her name.”

Breonna Taylor was killed during a police raid with a “no-knock” search warrant, with BLM activists asking for the officers involved to be prosecuted. Taylor had no priors and was in her bed when the raid took place.

The Louisville police changed its policy on the no-knock warrant two months after her death.

According to Sky Sports, Hamilton’s decision to wear the T-shirt may have come in violation of the FIA’s regulations on making political statements or gestures during races. The FIA is looking into the “incident” and may launch a formal investigation, should it decide a violation took place. For the time being, though, formal procedures have not yet been launched.

Speaking to the media after the race, the six-time F1 champion said wearing the T-shirt had long been his plan. “It took me a long time to get that shirt and I’ve been wanting to wear that and bring awareness,” Hamilton said.

He also posted photos from the event, with a message on how “we won’t stay silent” anymore.

Hamilton’s decision to wear the T-shirt and his message have sparked divided – and equally passionate – reactions, as should be expected. While he has received high praise from many for being a modern “hero” for his activism, dissenting voices criticize him for bringing “politics” into the sports.

Hamilton is the only black driver in the car racing sport, an issue he often brings up to highlight a lack of diversity in the F1.

Hamilton also felicitated with Naomi Osaka on her third Grand Slam win. He congratulated her for using her platform to promote anti-Black racism, just like he was doing.

“We have to continue to raise awareness with it and Naomi has been doing amazing, so huge congratulations to her,” said the six-time F1 world champion.