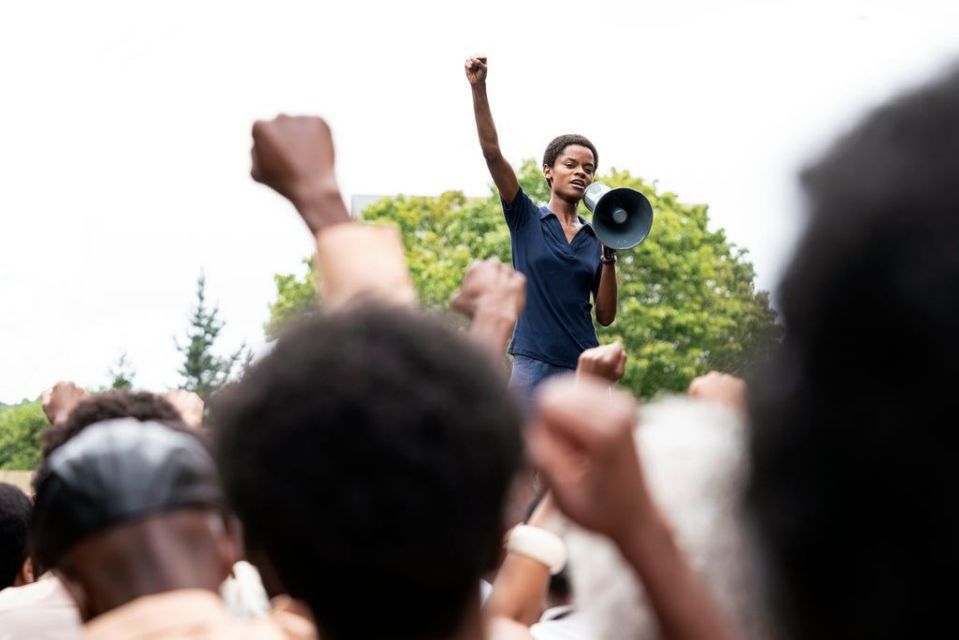 It’s at once eerie and infuriating that almost every protest scene in Steve McQueen’s Mangrove—the first film in his BBC anthology series, Small Axe—feels like it could be set in 2020. Letitia Wright plays Altheia Jones-LeCointe, one of the leaders of the British Black Panther movement, and each time she speaks into a megaphone, stands up in a courtroom or gets unjustly manhandled by cops, it’s a stark reminder that the war against police violence and anti-black racism is made up of perennial battles spanning generations. Mangrove, set in the late 60s and early 70s,tells the true story of London activists fighting for the rights of a local Trinidadian restaurant owner in Notting Hill. It follows Frank Crichlow (the stellar Shaun Parkes), Jones-LeCointe, and the rest of the Mangrove Nine, who were arrested and charged with inciting a riot. Their trial serves as the foundation of the film, and Wright as Jones-LeCointe—who represents herself in court—is exceptional. And it’s refreshing to see Jones-LeCointe get the portrayal she deserves after being erased from Guerrilla, the 2017 miniseries also about the British Black Power movement. This series also stands in stark contrast to Netflix’s hit The Crown when it comes to telling the story of British history and the Black voices who helped shape it.

“We need to challenge the system,” Wright as Jones-LeCointe says in a pivotal scene. “We mustn’t be victims, but protagonists of our stories.” That line stuck with me because Wright seems to have already applied this sentiment to her career. She’s best known for playing Shuri, a genius scientist and the little sis of King T’Challa (the late Chadwick Boseman) in Black Panther, the movie that broke the mold of the mostly white Marvel franchise. She starred in a stirring Black Mirror episode that commented on mass incarceration and how the prison system fails Black people. And now, she’s taking on the role of one of the most important Black women to lead the resistance in Britain at a time when Black women are finally being recognised for our integral role in progressive movements. These choices are intentional. Wright told The Hollywood Reporter that she takes on every project with a “responsibility to make our elders proud.”

Over Zoom, the 27-year-old, whose family moved from Guyana to London when she was seven, tells R29Unbothered why taking on the role of this elder (Jones-LeCointe now 75, works as a physician and scientist in Trinidad) was so important to her. Here, she breaks down the history of the Mangrove Nine, sticks up for her friend John Boyega (who stars in another Small Axe film), and explains how she deals with discrimination in Hollywood.

Refinery29: You are playing Altheia Jones-LeCointe, a Trinidadian woman who was at the forefront of the British Black Panther movement. You’re Guyanese British. Tell me about the connection you felt to Altheia and what you learned about the history of London’s Caribbean community while working on this project.

Letitia Wright: “She was at the forefront but I was amazed because it wasn’t her intention to be a leader. [The Mangrove Nine] all saw each other as equals. They just wanted to use their voice and represent their people.

“The history of it is something that’s very important for people to know. During World War II, the Queen reached out to the Caribbean and the countries within the continent of Africa and said, “we need help to rebuild our country after the war,” so you saw a massive inflow of Caribbean people. That’s where the anthology series picks up. We’re commenting on this burden, this weight, this oppression, this “you’re not welcome here” vibe in the atmosphere that was brewing for a long time and is still here. I think it’s important to remember that [Black people of the Windrush generation] didn’t come begging for anything. We were immigrants invited here to bring service men and women to help build the country back up after they had ripped everything out of our countries.”

Given all of that context and the fact that these issues are still going on, what did it mean to you to take on this role and channel such an important activist, especially in 2020?

“It meant a lot. Not every day do you get to represent someone like this or get a script like this sent to you. So, I’m super grateful and I’m super thankful that I can be a vessel for something of substance. I honour Altheia and everybody that’s been a part of the Mangrove Nine— those that are still with us or those that have passed away— and that they used their voice for change and in connection to what’s been happening. Right now, you see how much your voice needs to be for change; change that’s good and change that’s fair.”

There’s this beautiful monologue you deliver where Altheia gets really emotional talking about the next generation and the power of protest. We’re seeing that power being debated right now. What do you hope people take away from that scene?

“It is important because she’s speaking on lifting up your voice when there’s injustice. She is speaking on calling out when something’s wrong because how can you expect the next generation to come after us and be comfortable in the colour of their own skin without being hassled if we don’t stand up for them? She said the speech 50 years ago and 50 years later, we’re still talking about the same issues. It just shows us that as a society there’s so much that needs to be done. And it needs to be done very quickly. It should be about justice and fairness and just love for each other. All of this racial tension and prejudicial ways of thinking are terrible. It’s a cycle that just needs to end now.”

If someone wants to look at my CV and be like, “but she’s Black, we should give this role to Jessica Chastain” or whoever it is, then so be it. I’ll just find someone else who’s open-minded enough to work with me because of my talent and what I have to offer and not just the colour of my skin

Your friend and co-star John Boyega has been using his voice to speak out for the Black Lives Matter movement. He’s been getting backlash for it. Are you protective of him? How have you reacted to what he’s been dealing with for speaking out?

Do you feel like you just want to respond to the trolls and defend him?
“I just feel that everybody deserves that respect and everybody deserves the opportunity to present what’s on their heart and to share. And I feel like as a humanity, we should be able to allow people to share and say when they’re upset and what’s hurting them and we should have an intellectual conversation about it, one that will help to bring change and not to pull someone down for speaking up.”

You’ve talked about how, in the past, producers haven’t hired you just because you are a Black woman. You’ve said, “Well, they didn’t deserve my talent.” That’s a hard place to get to where those rejections don’t faze you. How did you get there?

“I got there through my faith in God. My creator made me with the truth that I am fearfully and wonderfully made. So, if someone wants to say that my skin colour is going to determine his box office gains, then he’s not really about the story, he’s not really about impacting people and generations to come. My belief in who I am and my worth helped me to form this mindset.”

What advice do you have for young Black women to have that same confidence?

“You cannot look for another human being to validate you at all—no matter who they are, no matter how much money they have. Because humans are flawed and we disappoint. If you get your truth and your stability from God, you will move forward. That’s my safe place. That’s my anchor. So, if someone wants to look at my CV and be like, “but she’s Black, we should give this role to Jessica Chastain” or whoever it is, then so be it. I’ll just find someone else who’s open-minded enough to work with me because of my talent and what I have to offer and not just the colour of my skin.”

This interview has been edited and condensed for clarity.